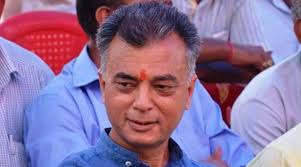 In response to the BJP’s request, Anil Sharma refused to campaign for the BJP and said that he is willing to quit the ministry.

Anil Sharma said that the Chief Minister said in an assembly segment in a meeting held in Mandi that he was lost somewhere and if anyone has knowledge about his whereabouts, then they should let him know. Anil Sharma expressed his deep resentment saying that the sarcastic comments from the CM of the state, that he has lost his faith in him is the reason for his resignation from the party.

Anil Sharma had joined BJP in 2017 and left Congress days before the assembly polls. Anil Sharma alleged the party to ignore him and his father keeping them sidelined and deliberately neglected, and hence he joined BJP. He alleged that he was sent back by Rahul Gandhi when he came to attend a rally in Mandi.

MGP withdraws support to BJP in Goa; to back Congress Candidates in Lok Sabha Polls 2019