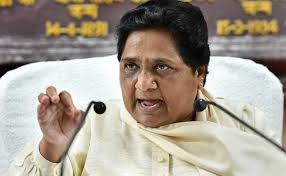 Bahujan Samaj Party (BSP) chief, Mayawati accused the Election Commission of ‘turning a blind eye’to the violation of codes of conduct by the Uttar Pradesh chief minister and BJP leader Yogi Adityanath in his visits to temples and feasts at dalits homes while he is on the ban order of EC for no campaigning.

The BSP supremo hit out the the UP chief minister saying that Election Commission has put a ban on Yogi Adityanath for violating the Model Code of Conduct twice. In spite of the ban he is visiting temples and eating food at the houses of dalits to influence the people. She accused that the Election Commission is not taking a note of his actions.

She alleged, “He is doing drama and broadcasting the same on the media platforms for eletoral gains. Why is Election Commission not taking any action against him?”

Mayawati urged the Election Commission to take action against the BJP leader. She said that if the Election commission fails to work unbiased, there is no chance of having free and fair elections in the country. The elections will be fostered by the ruling party and will be influenced in its favor.

Mayawati said that the people’s discomfort will not be at rest if Election Commission continues to be the same. The BJP leadership is still bent on doing the same arbitrariness as it has been so far.” She accused Prime Minister Narendra Modi for being nervous as the elections are drawing closer.

The Lok Sabha polling for the second phase has started today, April 18. the results will be announced on May 23.