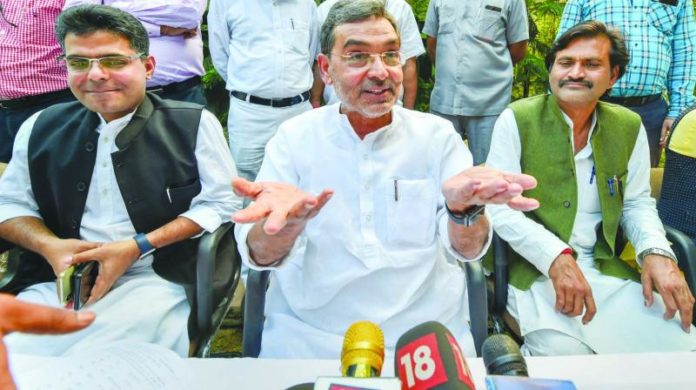 Rashtriya Lok Samta Party Chief Upendra Kushwaha who had recently announced his break-up with NDA and resigned as the Union Minister said Joining a hand with ‘Mahagathbandhan’ is among ‘one of the many options’ available to him in a run-up to the general elections 2019. Kushwaha further said that final decision is yet to be taken. Kushwaha’s comment came after a reporter asked him about his meeting with Congress Senior Leader Ahmed Patel on Saturday.

Kushwaha was in Patna on Sunday and was addressing his first Press Gathering, said, “Yes I had met Congress Leaders Yesterday, I can not disclose in Public what we talked about. But Joining hands with ‘Mahagathbandan’ is among one of the many options available, we have not taken the final call yet”.

RLSP Chief choose to skip the question about the rift within Party, as three legislators on Saturday revolted against the Party and accused him of pursuing ‘personal interests’

Earlier on Saturday in a big setback to the Party, Both the Rashtriya Lok Samata Party (RLSP) MLAs, Sudhanshu Shekhar, and Lalan Paswan, along with its single Member of Legislative Council (MLC) Sanjiv Singh Shyam announced that they will remain with NDA while addressing a Press Conference.

RLSP fought the 2014 general election as well the 2015 state assembly polls as an NDA ally has altogether three MPs in the lower house, including Kushwaha, while has two MLAs and One MLC in Bihar.

While all three legislators announced its disassociation with Upendra Kushwaha, while Two MP have been already walking as an Independent from last two years!

Training his guns towards NDA Kushawa Said, ‘NDA’s dreaming of coming back to power in 2019 will be dashed in Bihar, They will not able to win a single seat in the state’

‘Our party workers are going out to every corner of the state, getting signatures of the people in support of our charter of demands. Once we achieve the figure of one crore, we would send a truckload of these signed declarations to the chief minister’s residence,” he said.

He also announced the party would gherao the Bihar Vidhan Sabha premises on February 2, coinciding with the birth anniversary of Jagdeo Prasad, who was the tallest leader from the Kushwaha community, which largely constitutes the RLSP’s support base.