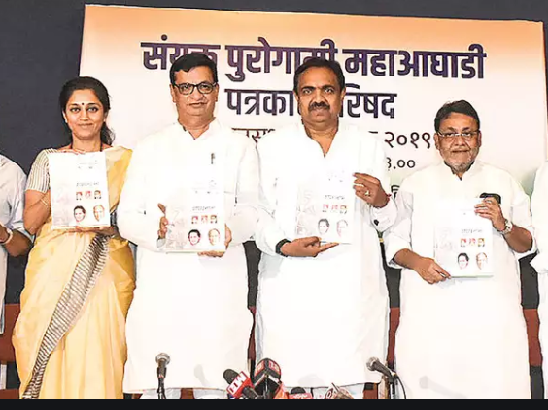 To gain a high ground in the upcoming assembly elections of Maharashtra state, the Congress-NCP alliance released its manifesto on Monday. The manifesto was released at the press conference held at Yashwantrao Chavan Hall.

It is expected that the alliance would give a befitting reply to the loud power of BJP–Shiv Sena grouping.

Main Key-points of the Manifesto-

The manifesto also carries a section of actions that will be incorporated to deal with climate change. Speaking on the event, Balasaheb Thorat said that the manifesto aims to achieve the “all-round development” of the various sections of the society.

Election Manifesto of the grand alliance led by Congress, NCP & other parties, has released for the #MaharashtraAssemblyPolls

We are certain that the implementation of this manifesto will surely bring Maharashtra back onto the path of progress.#Shapathnama pic.twitter.com/XAiF8ZtdtF

On being asked about the Chief-Ministerial candidate of the alliance, Balasaheb Thorat said that the alliance comes to the power, it will ensure that the Chief Minister will be from the NCP.