The counting of votes began this morning as per the official schedule provided by the Election Commission of India.

Live updates of the Assembly Elections

PM Narendra Modi and Union Home Minister & BJP President Amit Shah will address the party workers at the party headquarters in the evening.

Election Commission of India declared the results of 37 seats in Maharashtra. BJP lead with a total 14 seat win. 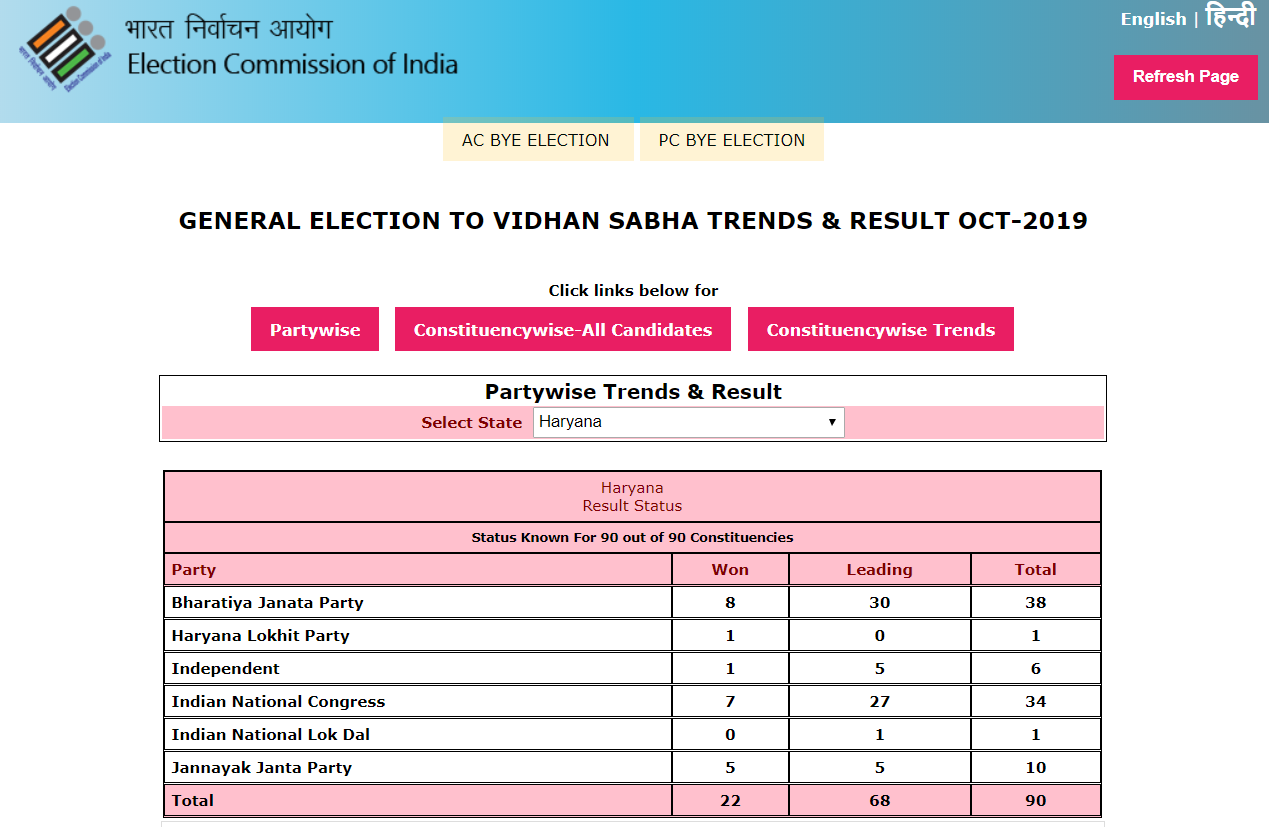 Aaditya Thackeray won from Worli constituency in his maiden election.

Subhash Barla denied the rumors of his resignation.

BJP's Haryana chief Subhash Barala says that he has not resigned from his post and that the news of his resignation is a rumour. (file pic) pic.twitter.com/0pGOIVUWxc

Bhupinder Singh Hooda has reached out to the independent candidates for securing a safe majority in the Haryana. Babita Phogat fell back from Dadri assembly.

BJP leads on 103 seats while Shiv Sena leads on 58 seats. Uddhav Thackeray will address a press conference at 4 pm today.

BJP won 5 seats in Maharashtra with Shiv Sena winning the equal seats. NCP has by far won 1 seat while leading on 54 seats.

#HaryanaAssemblyPolls : As per the official trends by the Election Commission, BJP is leading on 39 seats, Congress on 33 seats out of the total 90 seats in the state. pic.twitter.com/rOs9r4CmlQ

Deepnder Singh Hooda addressed a briefing and accused the saffron party of indulging in pressurizing independent MLAs to join the party.

#WATCH DS Hooda,Congress: BJP is trying to pressurize independent candidates as most of them want to join us. It can't be accepted in democracy.Independent candidates should be able to freely choose the party whom they wish to support.I want to appeal to EC about it through media pic.twitter.com/8qn3A1flJ1

Congress party is leading on 35 seats. Haryana in-charge Ghulam Nabi Azad expressed optimism about the party’s prospects in the state.

Shiv Sena candidate Aaditya Thackeray secured the lead by 54,000 votes as of now, while Jeetendra Malhad from NCP won.

Sharad Pawar said that the alliance will not go with Shiv Sena.

Nationalist Congress Party (NCP) President, Sharad Pawar: NCP-Congress and other allies will decide together, the future course of action. We will not go with Shiv Sena. #MaharashtraAssemblyPolls pic.twitter.com/JAr4WaWFVP Dushyant Chautala addresses a press briefing. He said that the final decision of the party’s course will be taken by the national executive committee of the party. The leader denied talks with any party.

Congress and BJP close in for the race in Haryana with 33 and 37 seats respectively.

NCP leader Sharad Pawar says that “party is happy with the performance.” NCP leads on 51 seats.

Bhupinder Singh Hooda addresses a press briefing where he said that “People have rejected BJP“. The leader also urged the opposition parties to unite. Congress party is leading on 33 seats.

Former Haryana CM BS Hooda in Rohtak: The time has come for Congress, JJP, INLD, and independents to come together to form a strong government. #HaryanaAssemblyPolls pic.twitter.com/VZ8IKe4kdW

Congress summons all MLAs to the national capital. BJP drop downs to 36 in seats on Haryana.

Anil Ghote wins from Dhule city seat. He had left BJP to join the NCP-Congress coalition.

Congress coalition falls back from the tally of 100 seats in Maharashtra.

Congress-NCP coalition crosses the tally of 100 seats in Maharashtra. AIMIM is leading on 2 just seats. BJP-Shiv Sena is crossing the figure of 165 seats.

A meeting between Uddhav Thackeray and Devendra Fadnavis is expected in Raut.

Haryana’s ruling party, BJP crosses the tally of 40 seats, while Congress’s share comes down to 26. Bahujan Samaj Party is leading on just 1 seat. INLD is leading on 2 seats. 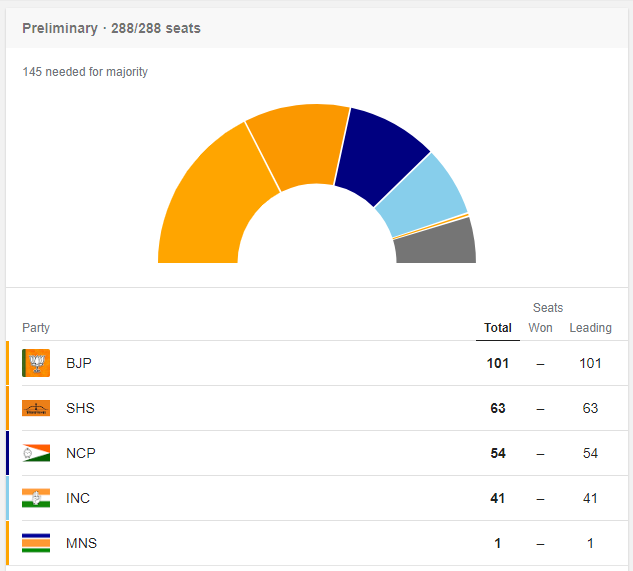 BJP hovers around 40 seats in Haryana while COngress is still bagging for the second position at leading on 31 seats. JJP party leads on 10 seats. 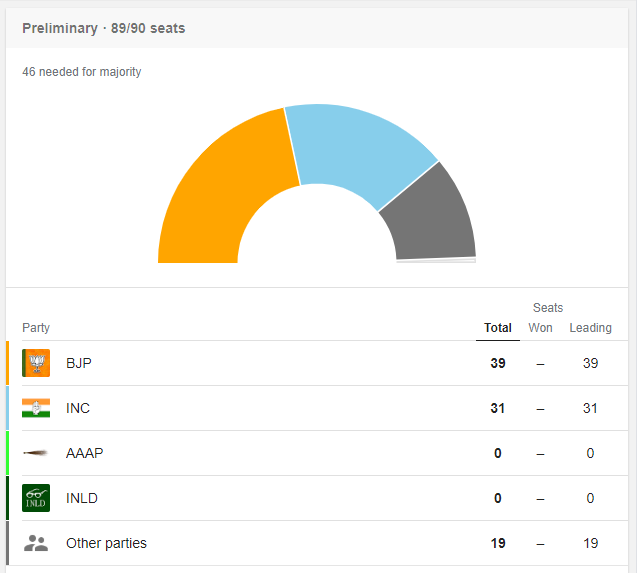 BJP-Shiv Sena sitting at 160 plus seats, while Congress coalition struggling at around 99 seats in Maharashtra.

Congress alliance with Sharad Pawar-led NCP is leading with 96 seats, while BJP and Shiv Sena coalition are leading on 159 seats in Maharashtra.

Yogeshwar Dutt from Baroda seat falling back while BS Hooda is leading from his constituency Garhi-Sampla Kiloi.

Maharashtra state- Bhartiya Janta Party is leading with 95 plus seats in its favor. Next to the saffron party is its coalition partner, Shiv Sena with around 65 seats in its basket. The Congress party is running at 39 seats. Haryana state- Here also, BJP is leading on 41 seats. Indian National Congress is running on the second position in the state, with its 26 seats.