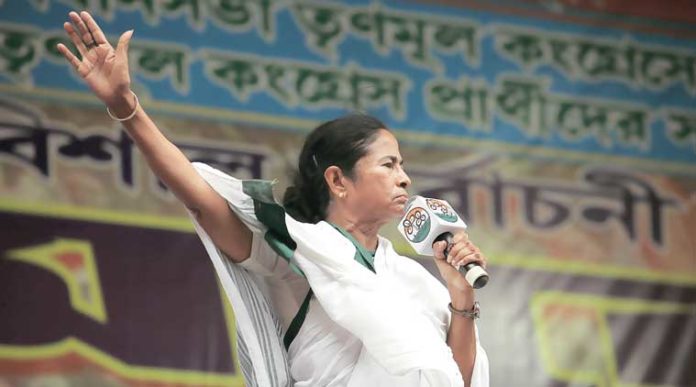 Mamata Banerjee who slated to begin her Poll Campaign on Friday will participate in a rally called by TMC Mahila Wing from Shraddhananda Park to Esplanade area to celebrate the International Womens’ Day.

A Senior Leader of the Mahila Wing who was familiar with the development told media that, ‘Mamata Di will begin her Lok Sabha Poll 2019 Campaign from March 8 just like earlier in 2014 and 2016 when she had begun her Poll Gearup on International Women’s’ day’. She added that the motive of the rally called by Mahila Wing is to create ‘New IndiaUniteded India and Strong India’.

Another TMC Leader said that Rallies, Functions and Celebrations will be organised by the party across the state to mark International Women’s Day.

While the State BJP Unit took a Jibe at TMC for Kicking off the Poll Campaign from International Women’s Day. BJP State Chief Dilip Ghosh while mocking TMC said, “It’s an irony that TMC is launching its Lok Sabha poll campaign from March 8 (International Women’s Day) when Bengal under their regime in last seven years has seen a massive rise in atrocities against women“.

Trinamool Congress who intends to play an important role in the upcoming Lok Sabha Polls has already formed its 12 Member Committee to look into party affairs and managing the Campaign. Its Supremo, one of the strong voices, who is playing a crucial role in forging and cementing Pan India Anti-BJP front had on January 19 organised a massive opposition rally that saw participation from almost all Opposition Parties.

Congress MP from Malda North, Mausam Benazir Noor turncoat to the ruling Trinamool Congress in January earlier this year. TMC Supremo announced that She (Mausam Benazir) will be the TMC candidate from the same constituency in the upcoming General Election.