Opinion of BJD from Odisha:

Odisha Chief Minister Naveen Patnaik has extended his full support of precious 36,500 votes to the NDA candidate. BJD had proposed the name of Shri PA Sangma, an eminent leader from the tribal community in the last Presidential election, many parties including the BJP had supported his nomination. In this backdrop and the fact that Sri Ram Nath Kovind is an eminent lawyer belonging to the Scheduled Caste community, after discussing with the senior party leaders, BJD had decided to support the candidature of Shri Ram Nath Kovind. “The Office of the President of India is above political considerations and Biju Janata Dal wants to keep it above politics,” he said.

Opinion of TRS from Telangana:

TRS in Telangana backed the BJP’s nominee and claimed it had suggested earlier fielding a Dalit candidate. Immediately after the announcement, Modi telephoned Chief Minister K Chandrasekhar Rao and requested his support. He said to Rao that, “as per your (the chief minister’s) suggestion, we have decided upon a Dalit candidate for the presidential post”. After receiving Modi’s call, the chief minister consulted his party colleagues and conveyed his party’s support for the presidential candidate to the PM.

Opinion of TDP from Andhra Pradesh:

The Telugu Desam Party, an ally of the NDA, welcomed the BJP’s decision to put up Bihar Governor and Dalit leader Ram Nath Kovind as the alliance’s candidate for the presidential election. TDP president and Andhra Pradesh Chief Minister N Chandrababu Naidu hailed Kovind’s candidature as “the right choice” for the highest constitutional post and pledged his party’s full support to him. “You have chosen a right candidate for the top post. An intellectual with high values belonging to the Dalit community is very apt in all respects for the president’s post,” Naidu told Prime Minister Narendra Modi, who called him this afternoon to inform him about Kovind’s choice. Naidu also offered to talk to TMC leader Mamata Banerjee to extend her support to the NDA candidate.

Lok Janshakti Party (LJP) chief Ram Vilas Paswan termed the decision of Prime Minister Narendra Modi to chose a dalit leader as the Presidential candidate a master stroke. Paswan said that “this is an historic decision. The Opposition should support the NDA candidate, rising above politics. If they don’t support, it would mean they are anti-dalits.”

Uttar Pradesh Chief Minister Yogi Adityanath today asked opposition parties to rise above party politics and support senior BJP leader Ram Nath Kovind for the post of President. “It is a new social awakening that a Dalit has been selected for the top most constitutional post of the country for which I want to thank Prime Minister Narendra Modi and BJP president Amit Shah on behalf of the people of the state,” Adityanath said.

Ram Nath Kovind being the Governor of Bihar, it is a time to celebrate for the state as he is chosen as the candidate for the Presidential Elections due on 17 July. Bihar Chief Minister Nitish Kumar is likely to play a vital role in the presidential elections. Nitish is known to enjoy a good personal rapport with Ram Nath, but he has been non-committal over his party’s support to the NDA nominee. Kumar paid a visit to the Raj Bhavan soon after the announcement of Kovind’s name,describing his meeting with the governor as a “courtesy call”. Kumar could initiate efforts to work on a consensus to support Kovind for the President’s post. As regional parties have their own aspirations in politics and Kovind’s candidature suits his party’s interest in Bihar. Nitish Kumar’s support to Kovind’s candidature depends on the choice of the opposition bloc for the president’ post.

The Presidential polls will be held on 17 July and the results will be announced by 20 July. The term of incumbent President Pranab Mukherjee ends on 24 July. 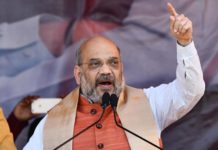