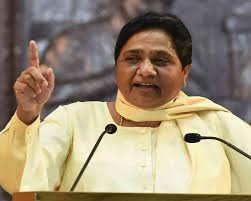 “In states where the BJP is in power, the party has misused government machinery to influence elections. They cross all limits, particularly, on the voting day. Such examples are prominent in the case of UP, Tripura and Maharashtra. Despite this, why is the EC not taking cognisance of the matter?” she tweeted in Hindi.

She went on to say the Prime Minister Narendra Modi knew his party was staring at poll defeat this time and hence they were indulging in violence and misusing the Central Bureau of Investigation, the Enforcement Directorate and the Income Tax Department to intimidate leaders of opposition parties.

BSP in the state is contesting the mega contest in an alliance with Samajwadi Party. BSP under the poll pact has kept the lion share of 38 seats with it, while SP and RLD bags 37 and 3 seats respectively.

General Elections 2019 has already started and is being held across seven phases starting April 11 to May 19. Phase-V is slated for May 6. Uttar Pradesh for its 80 Parliamentary seats will poll in all seven phases till May 19.