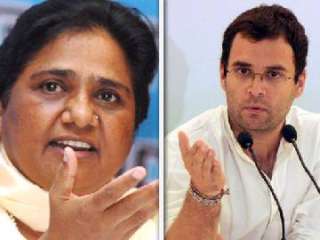 BSP supremo Mayawati has ruled out any possibility of alliance with the Congress party in the upcoming polls in Madhya Pradesh and Rajasthan. Addressing media on Wednesday she said “They (Congress) are getting arrogant and are under misconception that they can defeat BJP on their own but the ground reality is that people haven’t forgiven Congress party for their mistakes and corruption. They don’t seem to be ready to rectify themselves,” reported ANI.

Congress was caught off guard earlier when Mayawati had ditched the congress and formed an alliance with its opposition Janta Congress led by Ajit Jogi who was expelled from the Congress party.

Mayawati was clearly upset with the no. of seats being offered to her in the alliance. She stated that, “In Rajasthan, the Congress was offering us only nine seats out of 200 assembly seats, in Madhya Pradesh 15-20 (out of 230 seats in the state), in Chhattisgarh only 5-6 seats out of 90. We have noticed that whenever we have contested an election in alliance, all our votes get transferred to Congress”.

NDTV quoted congress leader Kamal Nath who was in negotiation with Mayawati for seats in MP as saying “I don’t know why Mayawati did what she did. We were in discussions with her till day before yesterday”.

Apparently the BSP chief was irked by congress leader Digvijaya Singh who had said earlier that Mayawati is under the pressure of the centre to not form any alliance otherwise she would have to deal with the case of corruption against her. Rubbishing Digvijay Singh’s claim she said, “Digvijaya Singh who is also a BJP agent is giving statements that Mayawati ji has a lot of pressure from Centre so she doesn’t want this alliance. This is baseless,” she said.

She also accused him of trying to jeopardise the chances of an electoral alliance between the two parties.

However, she maintained that she doesn’t have any grudge with Congress chairperson, Sonia Gandhi and party president Rahul Gandhi.

“I feel that Sonia Gandhi and Rahul Gandhi’s intentions for Congress-BSP alliance are honest. However some Congress leaders are sabotaging this,” she said

Though, she had quite a list of complaints with the Congress party. “Even though the BSP has always supported Congress to keep the communal forces away, but the fact is that the Congress has always backstabbed us,” she added. Referring to the Taj Corridor case she said that the Congress had framed her in it. “Thanks to the Supreme Court I have got relief in this case,” she said. She was also upset with the fact that despite several requests, Kanshi Ram, the founder of BSP was not honoured with the Bharat Ratna.

Congress spokesperson Randeep Surjewala had a positive outlook to Mayawati’s remarks and said that said the differences can be worked out between the two parties. “At times, out of emotions, sweet and bitter things are said. But at last, if Mayawati ji holds absolute trust in Rahul Gandhi and Sonia Gandhi, then other creases can be ironed out,” Surjewala was quoted as saying by ANI