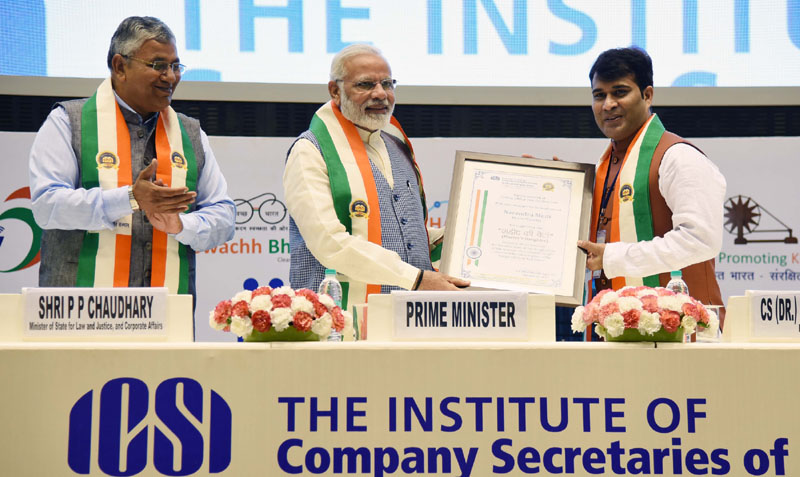 Taking a jibe at the critics Modi said the slowing economy will improve soon & he will never risk the country's future for the present gains.

Prime Minister Narendra Modi hitting out on every critic with a point by point detailed explanation, punctuated with sharp comments and comparison of the data of the previous UPA government assured that the slowing economy will be improved soon.

While addressing the gathering of company secretaries in an hour long speech, Modi blurted out the replies to every criticism that was made on the slowing of the economy and decline in the GDP growth. He said that the Indian economy was firm and just for the mere gains of the present he will not at any cost compromise with the future of the nation.

He pointed out that the opposition was attacking the implementation of decline in GDP but it failed to notice the achievements of the ruling government in three years. Providing the data, Modi said that BJP government had brought down inflation from 10% in the UPA regime to 2.5 %, shrunk Current Account Deficit to near 1%  from 4% and brought down fiscal deficit to 3.5% from 4.5%.

He also reminded that during the UPA government the GDP growth was only 5.7% or even less on more than 8 occasions, but the opposition was haunting down on the NDA government just because the GDP fell down for one time in April-June and is calling it a doomsday.

Addressing the issue of the implementation of GST, Modi said that, he has asked the GST councils to identify the problems faced by the people, especially the small and medium class business. He assured that the hindrances, be it technical or any other will soon be identified and solved as soon as possible. He also said that the government will also make amendments to the GST if needed to help the small businessmen.

While addressing the gathering Modi questioned that, is it the first time that in the third year of any government the GDP has dropped down to 5.7%? He pointed out that during the rule of the previous UPA government, in past six years there were at least 8 such occasions when the GDP was 5.7% or even lower.

The Prime Minister also said that when the Central Statistic Office had released the data of a growth of 7.4%, during the rule of the BJP government, the opposition had denied the facts and refused from believing it. Modi further said that it is true and the ruling government accepts that there has been a decline in the GDP but even this is true that the NDA government holds the power to reverse the situation and bring back the slowing economy back on the path.

Modi also informed the gathering that as per the latest updates the RBI has predicted that in the coming quarter, the GDP will shoot up again and will go up as high as 7.7%.

During his speech, he also touched upon the criticism of GST. He said that it has been three months now that the GST is implemented and after review the good and bad effects of it, the government has asked the GST council to find out the problems faced and fix the bottlenecks faced by the businessmen.

Narendra Modi also said that soon after the government was formed a SIT was made to investigate about the black money present in the market and a strict Black Money act was formed. He further added that insolvency and bankruptcy code were made and the benami sampradaya act which was pending from past 28 years was brought into action. Boasting about his government he said that the willpower to a bold decision like demonetisation was taken by the NDA government only.

During his speech, Modi said that 8 Nov will go down in the history as the Corruption Free Day. After demonetisation cash to GDP ratio dropped from 12% to 9%.

He further added that “I clearly understand what political trends are, everyone announces sops ahead of the polls. but shouldn’t there be ways to strengthen the nation other than bribing sops?” He also questioned that “should we just worry about vote and power? I cannot ruin the nation’s future for my present,” Modi said.