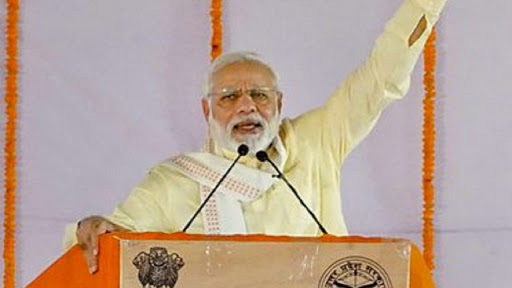 Addressing a rally in Lucknow on Saturday, Prime Minister Narendra Modi attacked Congress chief Rahul Gandhi for his ‘chowkidar-bhagidar’ comment for the PM.

Modi replied to Gandhi’s remark where he dubbed him as a participant of corruption. Modi said, “These days I am dubbed a ‘bhagidar’ (partner) and not ‘chowkidar’ (watchman). I feel honoured to be a ‘bhagidar’ of the problems of the poor.”

He added, “I take this allegation as an honour, I am proud to be a ‘bhagidar’ of the pain suffered by the poor, the hardworking labour class, the agony of a sad mother, a poor farmer whose crops get destroyed by natural calamities, of soldiers who brave bone-chilling weather as well as scorching heat.”

Rahul Gandhi during the no-confidence debate had said that instead of becoming a watch guard(chowkidar) the Prime Minister has become a collaborator(bhagidar) of corruption, referring to the Rafale deal between India and France.

Modi reiterated his earlier promise and said, “By 2022, we will try to ensure that everyone has a house. In order to meet this target, the government has approved 54 lakh houses in the cities and also provided more than one crore houses to people in villages.”

In his 30-minute speech, he blamed the Congress government for the poor urban development which he said the grand old party could have worked on after Independence when the population was not out of hands. He said, “The population was allowed to expand in an unplanned manner. Concrete jungles were allowed to grow. Today, the entire country is bearing the brunt.”

Modi presented the youth with five Es they should follow. “We are bound to build a system for future generations, where life is based on five Es: ease of living, education, employment, economy and entertainment”, said the Prime Minister.