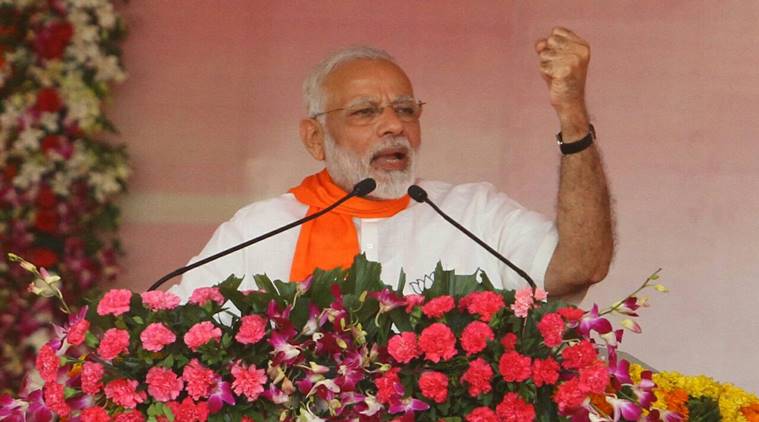 Addressing in Gandhinagar, Modi mounted a fierce attack on Congress & challenged it to fight one election on the agenda of development.

As the state prepares for the upcoming assembly elections, due in Dec this year, Gujarat has become the new battleground for BJP and Congress. Both the parties striving hard to get hold to the throne is striving hard in every possible way to lure in the voters.

It has been quite a while now that the political parties had begun their election campaign for the poll-bound state and BJP and Congress under the leadership of Amit Shah and Rahul Gandhi respectively have been on their toes. Though BJP has been ruling the state for 22 years, it seems like this time Congress is adamant on ending their political exile in the state and come back to Power.

The Gujarat Gaurav Yatra concluded on 16 Oct and Narendra Modi had come to address the mahasammelan yesterday. Throughout his speech, he kept lashing out at Congress and said that the Gandhis and Congress have always hated Gujarat and have been an obstacle to the development of the state.

While addressing the Gujarat Gaurav Mahasammelan in Bhat, Gandhinagar Narendra Modi thanked the people for attending the event in huge number. He said that “on all sides, till my sigh can go all I see is saffron colour and people supporting the saffron party.” Mounting a scathing attack on the Congress and Gandhis said that they have always hated Gujarat and the Gujaratis and treated them as irritants in the eye. Speaking about the impressive victory in Uttar Pradesh, Modi taunted at the opposition saying that the win in UP has made the political pundits” tell the Opposition “give 2019 to Modi, start focusing on 2024”.

Modi challenged that the opposition to show the guts and fight the elections on the grounds of development. But the party always hides behind by raising the issues of communalism, or by provoking the people against BJP, or by diving the people or by misleading them, but they never dares to face the elections on the strong basis of development, Modi said.

He said that while the Bhartiya Jansangh was just a beginner and had just stepped into the politics in the times of 50’s and 60’s, even at that time Pandit Nehru was scared of the party, now the Jan Sangh and the BJP is a full grown party and it is very natural now for the Congress to be scared. He angrily expressing his emotions said that the Congress hated Gujarat, BJP, Jansangh, they even blamed the BJP to be the murders of Mahatma Gandhi, sometimes they insulted BJP by calling them a party of the high caste and urban people. Every time the Congress has been giving names to BJP, but never once any of their allegations proved to be right he added.

Taking a dig at Himachal Pradesh Chief Minister Virbhadra Singh, Modi said that Congress walks shoulder to shoulder with people who are out on bail with corruption charges on them. Enraged Modi questioned that Congress party is a party on bail and can such a corrupt part develop and save Gujarat? He also targeted the Congress President Sonia Gandhi and Vice President Rahul Gandhi saying that “The mother and son are the leaders of this ‘jamanati party’. The whole party is on bail. How can these corrupt leaders teach the lesson of development to Gujarat?”

The Prime MInister said that he has faith in the public of Gujarat and their farsightedness and that the people will choose the right leader. He added the people of Gujarat had decided to throw away Congress in 1968 only, but they saved themselves and ruled only with a margin of few votes but since then Congress has not been able to establish its foot in Gujarat.

Questioning the Congress and all its supporters Modi said that if the party was so good and clean, what was the reason that before the elections 25% of the MLAs quit the party? He alleged that this very Congress party when it was in rule, sent the BJP workers, members and leaders to jail when they demonstrated the satyagraha movement, political protest and social protest. This Congress party has shown so many atrocities on the bJP but the party did not kneel and lose hope and as a result. today the flag of BJP is flying here in Gujarat and in India.

He attacked Congress saying that, they had played many conspiracies against him, they even tried to put him in jail, and to get to Modi, they put Amit Shah also behind the bars. But today the truth is revealed and everyone knows who was right and wrong he said.

Ferociously Modi hit the opposition on the slogan of  ‘Vikas gando thayo che’ whic is getting viral on the social media and even Rahul Gandhi has been using it in his every address, Modi said that Congress can never fight in the name of development. “Today, I am again throwing them a challenge to fight elections on the issue of development. But don’t defame development,” he said. “These people have looted this country. Who will save the middle class? For me, the country is above the party… And people need to understand what this is,” he added.

Bringing up the issue of GST on which the Congress has been targetting BJP and Narendra Modi, he said that Congress is equally involved and were partners in taking the decision of GST. “All political parties of this country, including Congress, and the central government take collective decisions on GST. Parliament does not take a decision on GST, governments of all political parties do that. It includes Congress governments in Punjab and Meghalaya. Central government forms only the 30th part of the entire council that takes decisions on GST. So, Congress does not have the right to spread lies on GST because they are partners in the decisions on GST,” Modi said.

To stand on the safer side, Modi projected that though everyone was involved in taking the decision of GST, the central government is taking all efforts to identify the bottleneck and address them immediately. He said that GST is a new tax regime implemented after independence and hence there is a possibility of loopholes in it. He further added that whatever are the problems the government is making attempt to rectify them, though he stressed on the point that”I am not saying the word ‘promise’, I am saying ‘attempts’.”

He also assured the businessmen that they need not be scared of anything. He said that some people are spreading fear amongst the people that Modi will be digging out the old records but he promised that there will be no witch hunting and no old records will be searched, this is BJP and not Congress he added.

Rasing the Gujarati ‘asmita’ or pride, Modi accused that the Congress has always hated Gujrati and now that the assembly elections are round the corner Congress party is getting fever once again. “I won’t repeat what they did to Sardar Patel, his daughter Maniben and Morarji Desai,” the PM said in an attempt to tap into the resentment in certain quarters about the perceived raw deal for Gujarati veterans from the Congress leadership,” he added.

Another matter of target that the opposition has been using a lot against the bJP as its failure, Modi also brought up the issue of demonetisation. He said that the entire practice of banning the old currency note of Rs 500 and Rs 100 was to bring out the black money. He claimed that as “as many as 2.1 lakh shell companies were caught and shut down. Out of 2.1 lakh, we took a sample of 5,000 companies and found that these shell companies had deposited Rs 4,000 crore in banks after demonetisation. That was the money of poor and middle-class people of society.”

Concluding his almost an hour-long speech Modi said that this is a battle of politics of development against the politics of dynasty and the development will surely win over dynasty. “Hoon Vikas chu, hoon Gujarat chu (I am development, I am Gujarat),” Modi asserted as he ended his address at the Gujarat Gaurav Sammelan’ at Bhat in Gandhinagar.

Both Himachal Pradesh and Gujarat will be facing the assembly election by the end of this year. The election commission a few days back had announced the date for the assembly elections in Himachal Pradesh as 8 Nov but delayed the announcement for the Gujarat elections. Though it had just said that the elections will be held before 18 Dec, so that the result of Himachal polls do not affect the Gujarat polls. The EC had cited the reason that since after the announcement of the poll date the code of conduct will come into effect Gujarat Chief secretary had written a letter to the EC requesting more time, saying that the work for July floods relief and rehabilitation is yet to completed properly. Since roads have been washed out, and the relief works began in September.

The opposition had criticised this decision of delaying the announcement of the date for Gujarat polls saying that they had deliberately done so under the pressure of BJP.  Congress had also alleged that the EC had deliberately postponed the announcement as Prime Minister Narendra Modi was to visit the state once again on 16 Oct. It was being speculated that he can promise even more sops to Gujarat’s voters at this rally and Modi may make some grand announcement on Monday, which would not have been possible if the EC had announced the poll dates and if the code of conduct had come to effect.

BJP getting intolerant when social media is unmasking it: Shiv Sena
Congress leader Shashi Tharoor tweets ‘only love for Gujarat’