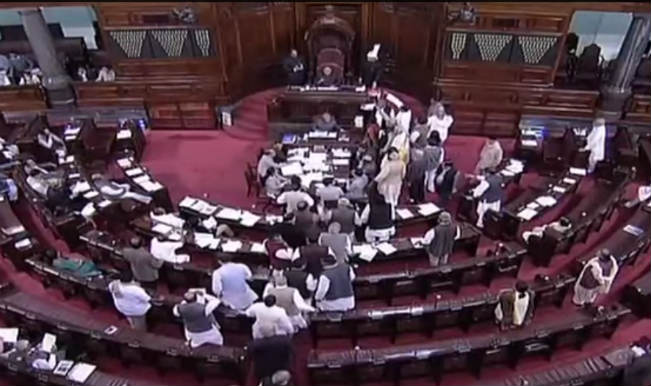 The 11th day of the Monsoon session of Rajya Sabha saw its beginning with a stormy session on Monday.

Though the House was scheduled to hold discussions over a number of bills and other business but due to the uproar created by the opposition, the proceedings were forced to be adjourned. As per the schedule, the House was to hold a discussion on The Constitution 123rd Amendment Bill, 2017, the National Commission for Backward Classes (Repeal) Bill, 2017, the Right of Children to Free and Compulsory Education (Amendment) Bill, 2017.

Within minutes of the beginning of the House chaos raised in Rajya Sabha in the Zero Hour as Opposition MPs trooped to the Well chanting slogans of ‘Narendra Modi shame shame’ and ‘stop murder of democracy.’ In spite of Deputy chairman of the Upper House PJ Kurien appealing to the opposition to maintain discipline in the House and to give notice for a discussion, the opposition continued with the slogans. Kurien said that the government was ready for discussion but the opposition should not disrupt the members time by staging a protest.

The opposition accused BJP of luring away its MLAs by bribing them and offering them tempting offers. Senior Congress leader BK Hariprasad alleged that the Prime Minister’s Office was “directly involved” in Gujarat’s developments. Responding to the allegations made by Congress, BJP also shouting back and accusing the Congress of kidnapping people’s representative.

Following the uproar created, Rajya Sabha proceeding were was adjourned .