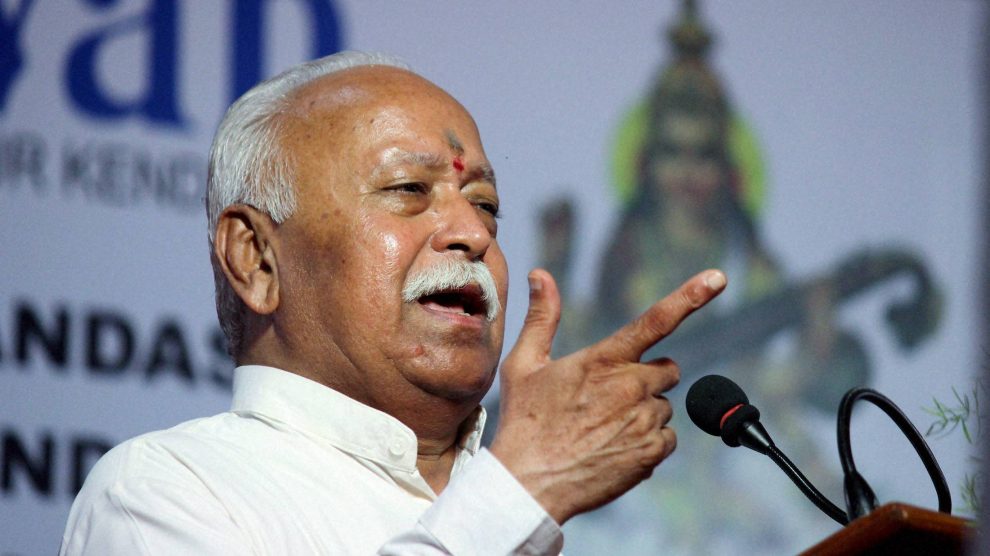 Rashtriya Swayamsevak Sangh (RSS) who has deployed its foot soldiers in Rajasthan to fight anti-incumbency against BJP Government is also backing the Party in Madhya Pradesh State Elections. The move came after the assessments of feedback that party has received and sense some struggle for the ruling party in order to woo farmers vote.

The RSS Cadres have started reaching out farmers in the state with the party’s agenda to waive farm loan to keep them in their fold.

One of the key appeals by the cadres is to people not to opt for NOTA while casting their vote. The State Functionary said RSS Cadres have been given a tasked of convincing voters who are upset with sitting BJP lawmakers that if even if they merely vote against the party, they would be playing into the hands of the Congress. “We are trying to convince people by meeting heads of the families with a request to them to bail out the BJP this time… ” said the above quoted RSS functionary.

One of biggest promise that the organization is worried about, is the Congress’s poll promise to not allow the RSS to conduct its ‘shakhas’ on government land if it comes to power.

RSS cadres are informing the farmers that the next BJP government will waive their farm loans, while CM Shivraj in a public rally also touched the issue and said that Congress has not waive loans of a single farmer in Punjab and Karnataka.

Reacting on BJP seeking RSS help, Congress Spokesperson Bhupendra Gupta said, ‘This is nothing new, BJP can never win an election without spreading hatred in the society on the name of caste, religion. But we are confident this time that they will not able to mislead voters’.

While Ashok Pandey, a Sah Sanghchalak of RSS in Madhya Pradesh, said the RSS is getting in touch with people in “national interest”.

The voting on 230 assembly state is staled for November 28, the counting will take place on December 11 with other four state assembly elections.