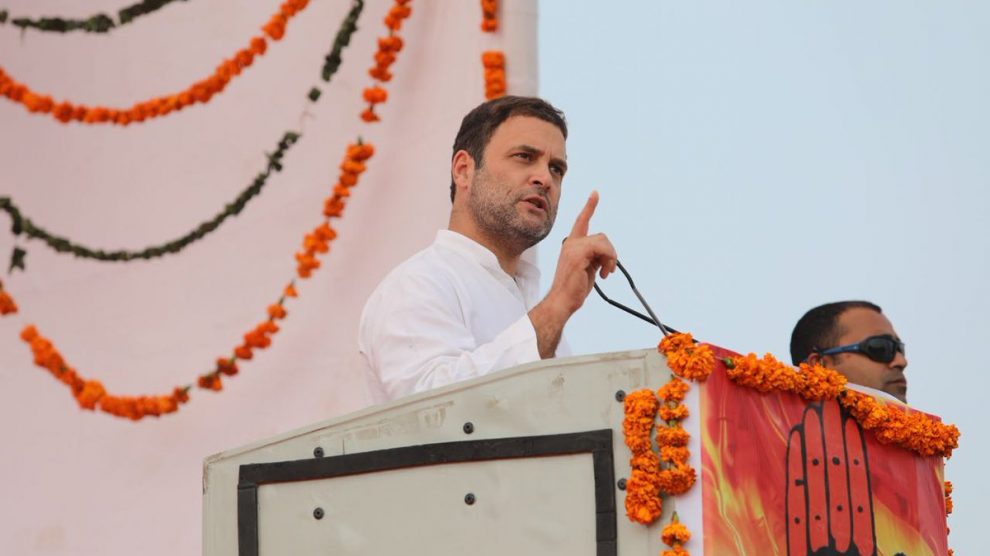 After bearing the insulting attacks of Prime Minister Narendra Modi while addressing rallies in Himachal, that Congress has accepted its defeat and left Virbhadra Singh to fight the battle alone in the hands of the fate, Congress Vice President Rahul Gandhi visited the poll-bound state on 6 Nov.

Rahul will be holding three rallies on Monday, in Paonta Sahib, Chamba, and Nagrota. Addressing the gathering in Paonta Sahib, the Congress Vice-President marked the beginning of the speech by remembering the words of the former Prime Minister of India, Indra Gandhi. He said that “she had once told that there are two types of people, one is who works silently and the other is who does not work but takes away all the credit of the work.”

He further added that Indra Gandhi had always advised to preferable try and be in the first category, as there is less competition compared to the second category. The Congress leader complimenting the Cheif Minister said that Virbhadra Singh is also a man of the first category.

Listing down the achievements of the incumbent Congress government in Himachal Pradesh, Rahul said that according to the reports released by a member of the NITI Aayog, of all the states in India, the rate of corruption is the least in Himachal Pradesh. He further added that in regards to the infrastructure of education and health, the state stands in the fifth position.

Taking a jibe at the Prime Minister’s initiative of a clean India, Rahul said that Himachal Pradesh under the rule of a Congress government is ranked first in regards of the Sawahhta Abhiyan and Himachal Pradesh is the first state in India to be declared as open defecation free state. According to the reports of the Central government, Himachal is the only state which enjoys electricity in 99.06% of its region, said Rahul. The Congress leader also highlighted that if the ratio of employment is measured, be it public or private, Himachal Pradesh has the maximum number of employed in India.

Rahul invokes Bhagwad Gita, saying that it is written in the holy epic that ‘kaam karo fal ki chinta mat karo’ (keep working without worrying about the results), but the Prime Minister has a different interpretation of this, he said. Rahul said that according to Modi, it is ‘faal sab kha jao, kaam ki chinta mat karo’ (eat away all the fruits and need not bother about the works to be done).

Attacking the Narendra Modi and the BJP he compared the statistics of Gujarat and Himachal Pradesh as Gujarat is ruled by BJP and Himachal is ruled by Congress. He said that it is not the Congress that is claiming the data, but according to the reports released by the Central government, in past five years, more than 60,000 people were employed in Himachal, whereas even though the state is bigger in strength, less than 10,000 were employed in Gujarat.

Further comparing the achievements of governments in Gujarat and Himachal, the Congress leader boasted that Himachal Pradesh gives an unemployment wage of Rs 1000 whereas in Gujarat it is zero, there are 4 medical colleges in Himachal and zero in Gujarat, government schools in Himachal around 1500 whereas only 150 in entire Gujarat.

Taking a dig at Narendra Modi, the Congress Vice President said that on one hand Virbhadra Singh speaks and advertises less but his government’s work can be seen while on the other hand, Modi only speaks and gives speeches one after the other, but does not work.

Slashing harsh attacks on the Prime Minister, Rahul said that Narendra Modi though speaks against corruption but chose to be tight lipped over the Vypam Scam in Madhya Pradesh, where the entire education system was sold out and 50 people were killed. Pointing out another incident he underlined that Lalit Modi himself handed over 1 crore to the son of a BJP Chief Minister, but the Prime Minister still prefers to stay mum. Not missing the chance as always, Rahul also attacked BJP President Amit Shah and his son Jay Shah saying that over that also Modi was quiet.

Further taking a jibe at Narendra Modi, Rahul said that the businessman in Gujarat are blaming Modi for the difficulty they are facing due to demonetisation and GST. He further added that “We are not opposed to GST. We said that the government should have conducted a pilot study before implementing it. Bu the government did not listen. Now everyone is suffering because of such a decision. When we come to power in 2019, we will make GST more people-friendly.”

Bringing up one of the failures of the BJP government under the leadership of Narendra Modi, The Congress leader underlined that “Employment is a major issue but Narendra Modi government has failed to provide jobs to the youth.” He also told that during the election campaigns in 2014, Narendra Modi had promised to provide 2 crore jobs, but looking at the current situation, it seems like Modi is only working for a few industrialists.

“China is instead getting jobs. They create 1 lakh jobs in 2 days but India is only creating 450 jobs in a day. I am ashamed of this fact,” Rahul said.

Rahul also alleged that introducing the note ban in Nov last year was a strategy of the BJP to win the assembly polls in Uttar Pradesh. He also said that Narendra Modi has hurt Himachal Pradesh’s tourism industry and its farmers.

Himachal Pradesh is one of the three states that is currently ruled by the Congress party in India. The state Assembly consists of 68 seats, which will be going to polls on 9 Nov and the results will be declared on 18 Dec. The incumbent and the six time Chief Minister Virbhadra Singh is the candidate of the Congress, while the two time Chief Minister, Prem Kumar Dhumal is the BJP candidate.