The Indian Wire » Politics » From Nehru to Rajiv to Rahul Gandhi, Congress is corrupted : Anurag Thakur 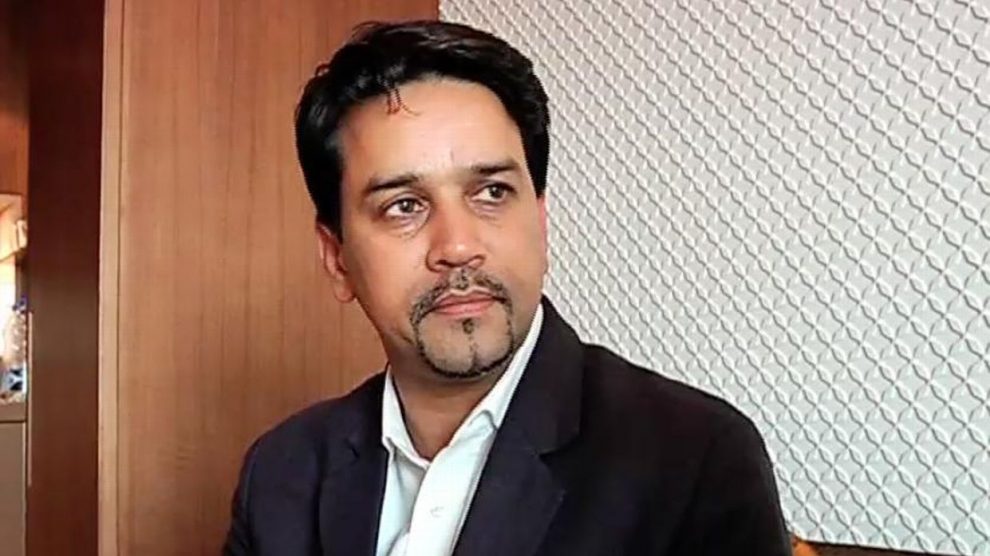 Anurag Thakur, the three-time BJP Lok Sabha MP from Hamirpur in an interview with ET accused Congress of having corrupt leaders in the party.

The assembly elections are due this year in Himachal Pradesh. Anurag Thakur, the three-time BJP Lok Sabha MP from Hamirpur had an interview with ET. During the interview, he directly attacked the Gandhi family saying that starting from Nehru to Rajiv to Rahul Gandhi all have had serious corruption allegations on them. Commenting on Congress skipping the launch of GST, he said that Rahul Gandhi is not a serious politician and first he should be given classes on GST.

Talking about the agenda of BJP for the forthcoming assembly elections, Thakur said that, Himachal Pradesh had witnessed prosperity and progress during the rule of BJP from 2007-2012 and even won 85 prizes for good work at national level. Whereas, the state has witnessed only corruption and ‘gundaraj‘ in past 5 years under the rule of Congress.

He also said that HP Chief Minister Virbhadra Singh has only been fighting cases and appealing for bail. Though he did get bail but was still unable to implement any schemes proposed by the Centre or show any progress in the state. He further added that the Congress government has failed to sanction even a single detailed project report (DPR) for the 61 national highways sanctioned by the Central government. Thakur also said that there is there is loot ki khuli chooth (corrupt are having a free run) under a corrupt CM in a state. Talking about the elections he said that if BJP comes back to power in the state their priority will be to work on implementing the policies proposed by the Centre for the overall development and the development of the farmers.

When asked about the reasons for losing in 2012, Thakur said that there was no anti-incumbency against BJP they just lost because of miscalculation on the party’s side. He also said that the distribution of tickets was not up to the mark.

Talking about the allegations of political vendetta charged by Chief Minister on him and his father, Thakur said that Virbhadra Singh and his family were responsible for their misdeed and were repaying for it. Moreover, it was during the time of UPA government that the preliminary inquiry was registered against the CM and he was asked to resign from the Union cabinet under Manmohan Singh.

Speaking about Congress skipping the launch of GST, Thakur said that, Rahul Gandhi is not a serious politician and he should be educated about GST, as he is unaware of what is GST and its advantages. He even mocked that what else could be expected from a person who does not know, how a samosa is made.

When asked whether the entry of Priyanka Gandhi in the politics will benefit Congress, he replied that Congress has always been possessive about heading the Party, they have never allowed anyone outsider to head the party. He accused all the Congress chiefs to have suffered from serious corruption allegations on them, be it Jawaharlal Nehru, Rajiv Gandhi or Rahul Gandhi. he said that Congress does not have leaders, it only has chattukaars (sycophants). He further added that there is a problem in the DNA of the Gandhi family, Priyanka, Robert Vadra, Sonia and Rahul Gandhi all tried their might in the UP elections but still faced defeat in the state. He even suggested that instead of fighting to win in the elections, Congress should rather start planning for what it will do after 15 years as no one will be able to dethrone BJP under the leadership of Narendra Modi.

Commenting on the recent tweet of Rahul calling Modi a weak PM he said that, perhaps he is missing the weak PM, Manmohan Singh, during the UPA regime who took instructions from 10 Janpath. Comparing Moti to Trump Thakur said that if Trump was the leader of the world’s strongest economy, Modi was the was the most popular leader in the world. Boasting about the achievements of Modi, he added that the PM has achieved grand success in every field, be it a surgical strike or demonetisation or launch of GST or establishing international ties.

During the interview, Anurag Thakur also held Nehru responsible for all the unrest prevailing in Kashmir. He even commented on the CBI raids on Lalu saying that it is the misfortune of India that people with such serious allegations are roaming around freely. He urged the court to take provide justice as soon as possible and close the case to set an example for other corrupt politicians also.

Indirectly he even suggested Nitish Kumar join BJP saying that “Those political leaders who want to stay clean and do clean politics should decide wisely about their alliances. Bihar progressed only under the JDU and BJP alliance but in the last two years people have started talking about the goondaraj (hooliganism).”

Anurag Thakur also spoke about the West Bengal government, calling it a failed and confused government like Congress. He accused Mamata Banerjee government saying that all the ministers are involved in corruption cases and scams. Banerjee herself is busy appeasing the minorities rather than focusing on bringing any investment in the state. He further added that West Bengal has become a hub of illegal cash drugs and illegal migrants.

Concluding the interview, Anurag Thakur talked about the Kumble’s exit suggesting that BCCI should have been more careful in handling such matters and should have avoided bringing embarrassment both the coach and the player. Praising the leadership qualities of Virat Kohli he said that, he has the abilities to take the Indian cricket to the next level.

Presidential Election 2017 : Meira Kumar to campaign in Bhopal
Paytm Mall gets 800 employees from One97 communications