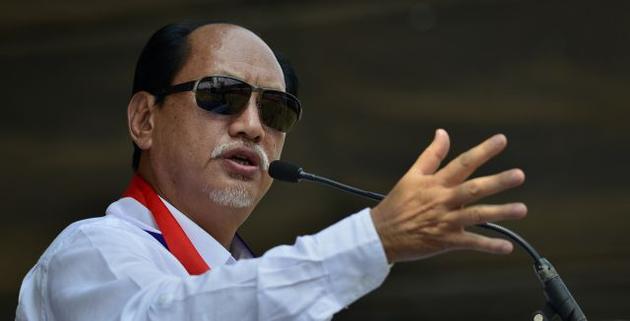 The Naga People’s Front leader T R Zeliang resigned as chief minister of Nagaland on Tuesday.  His resignation paves way for Senior NDPP leader Neiphiu Rio to take over. The swearing will take place on Thursday.

Governor P B Acharya asked him to prove his majority before March 16. An official release from the office of the Governor stated that the Governor has appointed Rio as the next chief minister. The release read,

“…In a letter addressed to Neiphiu Rio, the Governor stated that he has received letters of support in favour of Shri Rio from legislators of BJP, JDU, and an independent MLA, besides NDPP legislators. The Governor has proposed to administer the Oath of Office and Secrecy to the Council of Ministers on 8 March 2018 at 11.30 am at Khouchezie (Local Ground) Kohima.”

Zeliang was not in a state to resign and had the hope of persuading the BJP leadership to back NPF. However, these efforts proved futile and Rio’s Nationalist Democratic Progressive Party (NDPP) got the BJP backing. He met the Governor on Tuesday and handed his resignation.

Zeliang said that NPF with its 26 MLAs, had elected him the leader of the legislature party in Assembly. He further stated that he met the Governor to stake the claim as leader of the single-largest party, along with letters of support from NPP and JD (U).

The NPP has stayed true to the support while the JD (U) has switched sides for the Rio-led NDPP-BJP alliance.