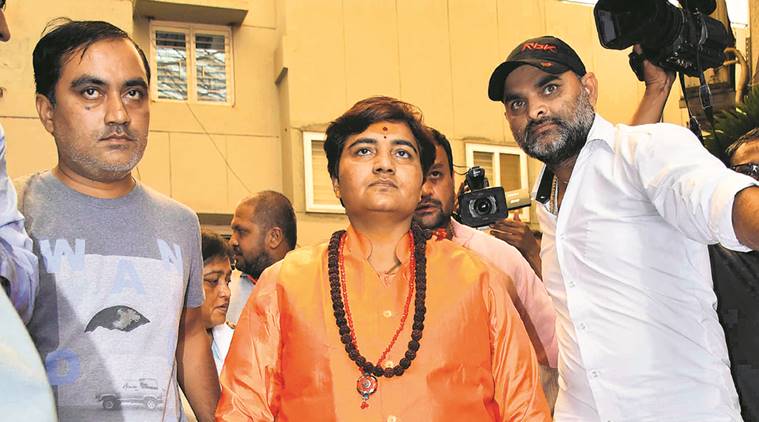 The NIA Special Court on Wednesday render null and void the application seeking to bar Pragya Singh Thakur from Contesting the Lok Sabha Polls 2019. The Court said that it cannot bar anyone from contesting polls.

While Advocate appearing for the applicant said, ‘She isn’t attending the court proceedings on grounds of ill-health, but she is campaigning for elections where she is not looking ill’

Earlier on Tuesday, Pragya Singh Thakur, BJP nominee for Bhopal and an accused in the Malegaon blast, sought dismissal of the plea filed in the court seeking to bar her from contesting the Lok Sabha polls.

BJP Leader through his counsel filed a reply and claimed that the plea that was filed in the court seeking to bar her from polls is “frivolous” and moved with a “political agenda”.

Earlier on Thursday last week, the father of one the victim of the Malegaon blast moved to the Special Court seeking direction to bar her from Contesting. Sadhvi has been named by the BJP on Wednesday against the Congress Stalwart Digvijay Singh from Bhopal Lok Sabha Seat.

The father of the victim, Nisar Sayeed had lost his son in the 2006 Malegaon Blast in Maharashtra claimed lives of other 5 and many others injured. The petition filed by Sayeed stated that she is out on a bail citing health issues if she can contest the polls and then she has misled the court to get a bail.

Sadhvi Pragya has been charged in the Malegaon Blast. She is currently out on a bail in the case. It should be noted that the Court had dropped provisions of the Maharashtra Control of Organised Crime Act (MCOCA) against Sadhvi Pragya, but she is being tried under the Unlawful Activities Prevention Act (UAPA).

Ever since Sadhvi Pragyna nominated for Bhopal, she had made many controversial remarks and the party is facing intense criticism from the opposition.