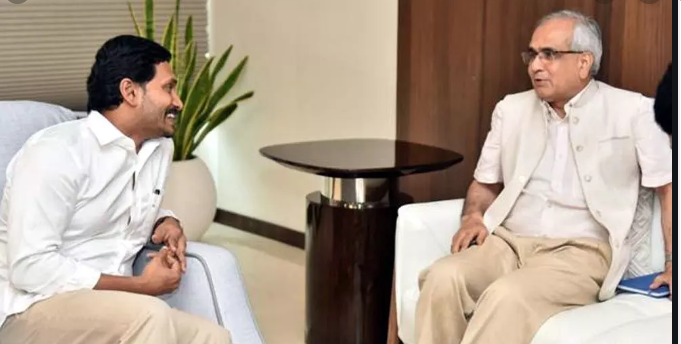 In a bid to oversee the funding situation of Andhra Pradesh, Chief Minister YS Jagan Mohan Reddy held a discussion with NITI Aayog Vice-chairman Rajiv Kumar. The meeting held in Amravati mainly revolved around the discussion of funds for the development of the state from the Centre.

The meeting also saw the participation of many senior officials of the government. State ministers such as Buggana Rajendranath, K Kannababu, M Gowtam Reddy, G
Jayaramulu were also present in the meeting.

It was also reported that the meeting also saw the presentation by state departments. LV Subramanyam (Chief Secretary) highlighted the works of the state government. He also mentioned that the state government is implementing many policies to ensure transparency in governance. In the meeting, the Chief Secretary said, “NITI Aayog alone can cooperate Andhra Pradesh which is suffering losses after bifurcation. 15th Finance Commission and NITI Aayog should liberally help the state. The Centre is planning to achieve a $5 trillion economy. The state will also be a part of achieving that target if the Centre gives a helping hand.”

To this, Rajiv Kumar assured that the NITI Aayog will do the needful and help the state. He also advised the chief minister to focus his efforts on housing in rural and urban areas. Highlighting the high rates of Anemia in the state of Andhra Pradesh, he also urged the state to focus on women and childcare. He, as quoted by ANI, said “Proper care should be taken so that minerals and vitamins be available in food. The state should focus on food processing and agro products export.”

YS Jagan Mohan Reddy also iterated the developmental schemes taken by the state. He apprised the officer that state is doing its best to eradicate illiteracy in the region. More than 44000 schools have been planned to develop in a phased manner. The state has also launched “Amma Odi” scheme which gives Rs 15,000 to every mother sending her children to school. Reddy also said that the Ministry of Human resource development can replicate the “Amma Odi” scheme on a pan-India basis.

The Chief Minister also said that the sanitation facilities and quality of food given under mid-day facility are very well being taken care of.