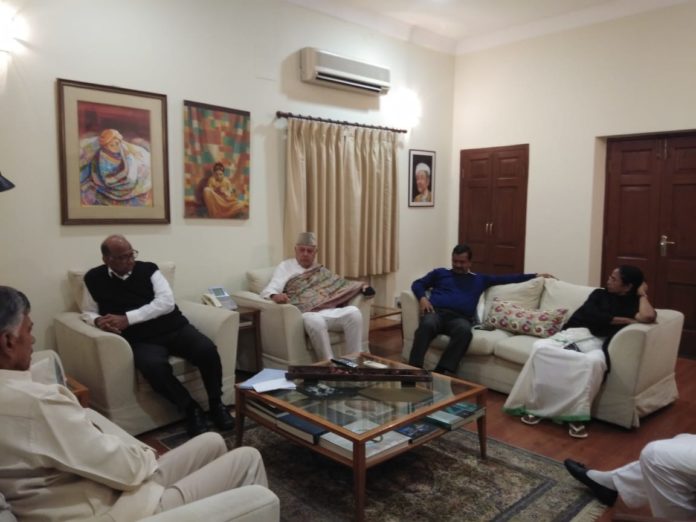 Interestingly, the meeting brings Congress President Rahul Gandhi and AAP‘s Arvind Kejriwal together as both were seen sharing the room for the first time.

Congress Chief told reporters after the meeting, ‘We had a very constructive meeting. We agreed that the principal target for all of us is to fight against the assault on institutes being carried out by BJP at Centre’

He added that all leaders have agreed to have a common minimum programme. we have a commitment that we’re all going to work together to defeat BJP” He added.

Congress Pres Rahul Gandhi after a meeting with Sharad Pawar, Chandrababu Naidu, Farooq Abdullah, Mamata Banerjee, Arvind Kejriwal: We had a very constructive meeting. We agreed that principal target for all of us is to fight against assault on institutes being carried out by BJP pic.twitter.com/XIuWB52LUg

Arvind Kejriwal who was seen sharing the room for the first time with Congress Chief amid speculations about AAP-Congress alliance in Delhi called it ‘Constructive Talks’. AAP Chief said, ‘Opposition will work together to defeat BJP’. The meeting indicates that the Congress and the Aam Aadmi Party, who have been bitter rivals since the regional party came to power in Delhi in 2015, may forge a tie-up.

Telugu Desam Party Chief and Andhra Pradesh chief minister N Chandrababu Naidu said there is a democratic compulsion to save India while Farooq Abdullah of the National Conferences termed the meeting “good”.
All the Opposition Leaders – Mamata Banerjee, N Chandrababu Naidu, Farooq Abdullah – were in the national capital and had earlier in the day attended the Mega Opposition Rally ‘Tanashai Hatao, Loktantra Bachao’ Rally called by Aam Aadmi Party on Wednesday.