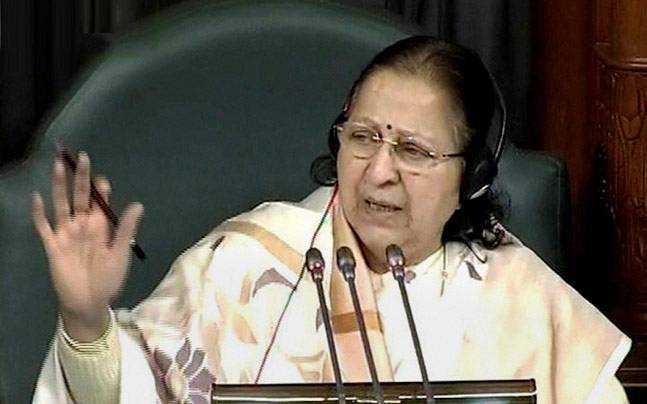 The LS was disrupted again on Tuesday as Congress members sought to raise the allegations leveled by Narendra Modi against Manmohan Singh.

As the surveys had predicted the Bhartiya Janta Party won the assembly elections both in Gujarat and Himachal Pradesh. Though its a defeat for the party as per the views of many, Congress managed to make a thumping come back in the political equation of India under the leadership of newly appointed party president Rahul Gandhi.

The elections are over and the results are also declared, but it seems like the allegations made during the campaigning and the row that was stirred still continues. Addressing the campaign rallies, BJP star campaigner, Prime Minister Narendra Modi had made some serious allegations on his predecessor. Modi had alleged that former Prime Minister Manmohan Singh was planning a conspiracy with Pakistan against BJP. He had also said that the Pakistanis were influencing Gujarat assembly elections.

These serious allegations came after Congress leader Mani Shankar Aiyar called Narendra Modi a ‘neech kisam ka admi‘ and by ‘neech’ he meant low and not low born. However, Modi altered the remarks of Aiyar to use it in the favour of the party and gain the sympathy of the Gujaratis. He said that by calling him a low born, Aiyar had not just insulted him, but entire Gujarat and urged the people to give the Congress a befitting reply by not voting for them.

During the rallies, he also brought up the issue that the comments made by Aiyar were a part of a conspiracy planned by Pakistani delegates, Manmohan Singh, and a few others to hamper the image of Modi and BJP in Gujarat. He said that just a day before the remarks made by Aiyar, he had held a dinner for ex-foreign Minister and a few other Pakistani delegates and Indian leaders. He had raised a question that what was the need for the Pakistanis to interfere in Indian politics. Addressing the rally he had said “The news is that Pakistan High Commissioner and foreign minister and Manmohan Singh met at his house just before the Gujarat polls. This is a serious issue that I want to ask. What is the reason for secret meeting with Pakistanis.”

Responding to these allegations, unlike his character, Manmohan Singh had given a scornful reply to Modi through an open letter. The Congress had demanded an apology from the Prime Minister and Manmohan Singh had said that Modi cannot make such serious allegations against him. This allegation of Modi had received heavy criticism from many and few also said that to win the elections, Modi has dropped down to such low level and is using these tactics. The Congress had also said that the party would raise the issue during the winter session and demand an explanation and apology from Narendra Modi.

The winter session of the Parliament began on 15 Dec, a day after the second phase of voting ended in Gujarat. The first session was adjourned soon after it began, however, on Tuesday the Lok Sabha was disrupted as the Congress brought up the allegations made by Modi. Soon as the session began on 19 Dec, Congress members again tried to raise the issue but Speaker Sumitra Mahajan denied them the permission and continued with the question hour. Congress members, however, gathered near the Speaker’s podium and continued to raise slogans demanding an apology from Modi.

“All elections are over, the things that are said on the roads shall not come to Parliament… I am not allowing you to raise the issue,” Mahajan said. However, the Congress continued with the sloganeering “Pradhan Mantri maafi mango” (PM apologise) and “Pradhan Mantri Sadan mein aao” (PM come to the House), which angered the speaker even more as it was disrupting the proceedings of the session which was already delayed. Trying to control the situations Sumitra Mahajan said that “Again and again I am requesting you, don’t disrupt the Question Hour. As per rules, I cannot allow and I will not allow.”

The winter session which usually began by mid of Nov was delayed this time in wake of the Gujarat Assembly polls. The Congress had also raised questions and alleged the Prime Minister for deliberately postponing the session so that the proceedings would not affect the polls. Denying the permission to Congress, Mahajan once again slammed out at the party saying that “When the Winter Session had not started, you were asking for it. Now you are disrupting the session… I am sorry, please don’t do that. You don’t want the session to run, give it in writing… You talk about calling the winter session… this is not proper at all.”

Even after Speaker Sumitra Mahajan warned the Congress leaders that she would name them if they did not stop, the ruckus continued. The naming of a member by the Speaker generally leads to disciplinary action.

Finally, the speaker had to adjourn the session until noon. Following the adjournment, the Congress members staged a walkout. Congress leader Ghulam Nabi Azad said that “the Prime Minister has questioned D. Manmohan Singh’s integrity and loyalty to the country, he should come in the house and make it clear.”

Reacting to the statement of Mahajan that the elections are over and the Congress could not raise the issue now in the session NCP’s Tariq Anwar said the issue should not be linked to polls.

A similar ruckus was created on 18 Dec as well when Congress members had raised the issue of allegations leveled by Prime Minister Narendra Modi against his predecessor Manmohan Singh. Only minutes after the house met the session had to be adjourned as Congress members stood on their seats and created a ruckus over the issue.

Meanwhile, the Pakistani leaders also criticised the allegations of Modi and said that the Indian political parties should fight the elections on their own and not involve Pakistan’s name in it allegedly. On 19 Dec just ahead of the beginning of the session another statement came. Addressing a press conference, vocal National Conference leader Farooq Abdullah rubbished conspiracy theories alleged by Narendra Modi. He also underlined Modi’s  surprise visit to Pakistan for Nawaz Sharif’s granddaughter’s wedding. He said that Narendra Modi himself went to Pakistan for food.

“He himself went to Pakistan for a meal, did he map out a controversy over his meal there?” Abdullah told reporters outside the Parliament building in New Delhi. He also added that “Pakistan koi saazish nahi karta (Pakistan doesn’t engage in conspiracies).” Expressing his views on the defeat of Congres in both Himachal Pradesh and Gujarat, the former Jammu and Kashmir Chief Minister said that “Not taking any names, but if some people wouldn’t have said certain wrong things, Congress would have won in Gujarat. But they managed to put up a good show there.”

In regards to BJP’s win in Himachal, he said “this is a regular pattern in the state. One party ‘outseats’ the other every five years, its nothing new in the state.” He also congratulated the Congress on its performance.