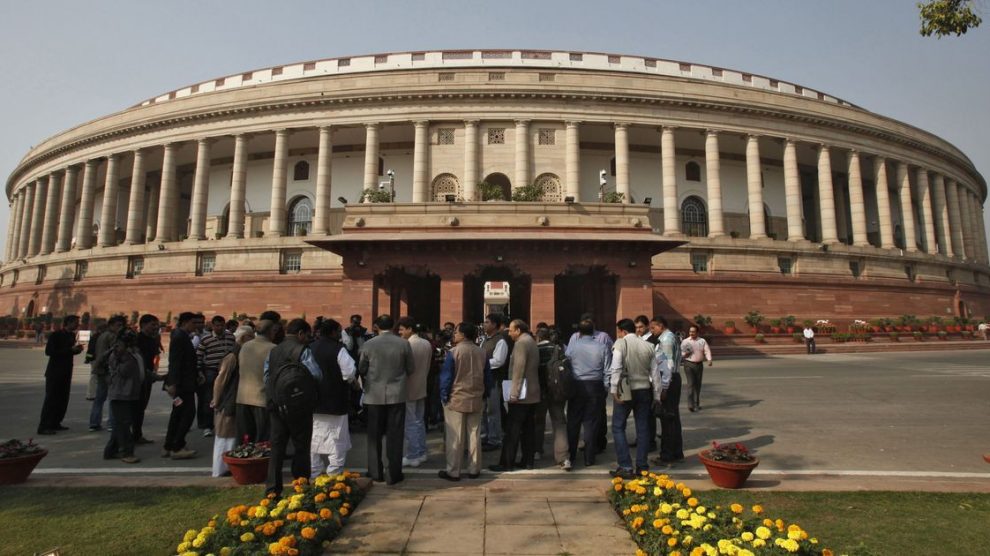 The RS was adjourned till Thursday, while Question Hour continued in LS after the disruptions over Modi’s remarks on Manmohan Singh.

The Gujarat elections are over but it seems like the repercussions of the polls will be felt until long. During the election campaigning in Gujarat, Prime Minister Narendra Modi had made some serious allegations on former Prime Minister Manmohan Singh. He had alleged that suspended Congress leader Mani Shankar Aiyar, along with Manmohan Singh, former Vice President Hamid Ansari had held a seceret meeting over dinner with Pakistan envoy and an ex-foreign minister.

These allegations had a much larger impact on the elections and even more on Manmohan Singh. The former Prime Minister, unlike his character, strongly expressed his discontent with the remarks of Modi in an open letter. Congress has also criticised the allegations of Narendra Modi and demanded an apology.

The winter session began on 15 Dec, a day after the voting ended in Gujarat, but not a day has passed without the opposition creating a ruckus over the allegation of ‘Pakistan conspiracy’. On Wednesday during the winter session, the Congress accused the Prime Minister of violating the Constitution and the dignity of his office. The opposition had earlier demanded an apology by Modi, but now the party is asking him to take action against Manmohan Singh if he has proof that the former Prime Minister was conspiring with Pakistan to influence the Gujarat assembly elections.

The Congress said that the Prime Minister is violating the constitution by not taking action against those behind conspiracy with Pakistan. From day one of the winter session, the Congress has been demanding clarification on the remarks made by Modi. The party on Wednesday also said that Modi should clarify that he used the remark to win the Gujarat polls.

The opposition party also underlined that had Atal Bihari Vajpayee been the Prime Minister, he would have apologised 10 times, but it depends on who the PM is. The party also alleged that Modi was trying to break the country and hamper the image of his predecessor. Ghulam Nabi Azad, the leader of the opposition party demanded an explanation from Modi saying that “If the prime minister is taking his words back, we will accept that too. Then he need not apologise. He should only say that he said it to win the Gujarat election.”

The opposition leader making scathing attacks on Narendra Modi said that the Prime Minister should show up in the Parliament and accept that since the BJP was losing in Gujarat, he had no option but to make up the story of “conspiracy with Pakistan”, so that the BJP could win the sympathy of the public and the image of the Congress could be portrayed as anti-nationalist. “The one who has leveled allegations should explain. If there is truth in his allegations, the people concerned be punished. It is the culture of the BJP to abuse, call people anti-national, beat them, fire bullets at them. This has become an order of the day,” Congress said in the parliament.

While the session of the Rajya Sabha was washed out after the Congress created a ruckus during the proceedings despite Chairman Venkaiah Naidu stating that there was no question of an apology. He said that “This is not the way, nobody is going to give an apology. Nothing happened in the House. The statement was not made here.”

The party also staged a walk out in Lok Sabha and boycotted the session after lunch also. The Congress members also alleged that the treasury benches were directing the Chair and not allowing the Congress leaders to speak.

In his statement to the reporters outside the Parliament senior Congress leader, Mallikarjun Kharge said that “The prime minister is trying to break the country and blemish the image of good people.” He further added “If you had proof, you should have lodged an FIR against former prime minister Manmohan Singh and arrested him. You are tarnishing his image and questioning his nationalism. If the prime minister had proof, why did he not take the services of intelligence agencies if there was something anti-national.”

The Rajya Sabha was adjourned twice and was disrupted again as it met at 2 pm as the members of the opposition party gathered near the Speaker’s podium raising slogans. Meanwhile, the party’s leader in the House Mallikarjun Kharge requested permission to raise a point of order. Regarding the permission od Kharge, Deputy Speaker M Thambidurai, who was in the Chair at the time said that the permission would be granted only if the issue was related to The Public Premises (Eviction of Unauthorised Occupants) Amendment Bill, which was being taken up.

Trying to continue the discussion on the bill, Thambidurai finally agreed to give permission to Khagre as the Congress members were not allowing to carry forward the proceeding for the bill in the discussion. Mallikarjun Kharge requested the Deputy Speaker to expunge the remarks of BJP MP Poonam Mahajan, made during the zero hour. She had alleged that the Congress leaders were conspiring to remove Modi.

“One member used defamatory words against the former prime minister who is not a member of this House,” he said. Following this, the Congress MPs staged a walk out alleging that the government was controlling the Chair.