The Indian Wire » Politics » Lok Sabha Polls 2019: PM Modi to kick off campaigning for Phase VI with two rallies in West Bengal; one in Jharkhand 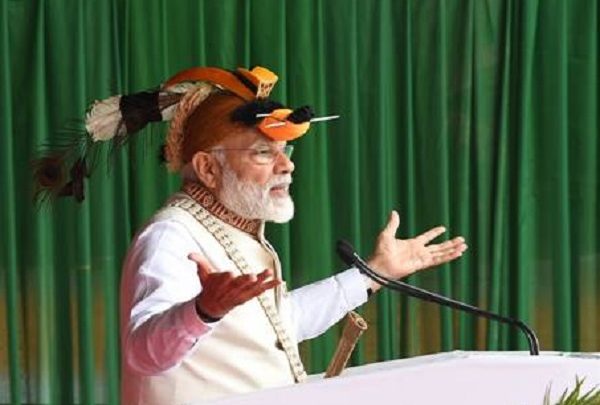 Intensifying its hunt to retain power at Centre, Prime Minister Narendra Modi on Monday will begin its campaign trail for Phase-VI due for May 12. PM Modi on his first day of Mission Phase VI will address two rallies in Mamata Banerjee‘s Bastion West Bengal and a rally in Jharkhand.

As per schedule, PM Modi will address a rally in West Bengal’s Tamluk at 10.35 am. While later in the day, He will be seeking votes for the party in Jhargram district of the state. While he is also slated to address a rally in Jharkhand’s Chaibasa at 2:15 pm.

In Jharkhand’s Chaibasa that fall under Singhbhum Lok Sabha Seat, BJP has named its sitting MP Laxman Giluva who will be taking on Congress Gita Koda.

While early in the state, he will also visit the Cyclone-hit Odisha to review the situation in the state. ‘Will be in Odisha tomorrow morning, where I will review the situation due to Cyclone Fani and hold meetings with top officials. The Centre is committed to provide all possible assistance in relief and rehabilitation measures underway’, PM Modi tweeted on Sunday.

Will be in Odisha tomorrow morning, where I will review the situation due to Cyclone Fani and hold meetings with top officials. The Centre is committed to provide all possible assistance in relief and rehabilitation measures underway.

General Elections 2019 is being held across seven phases starting April 11 to May 19. Voting in 51 seats under Phase-V is currently underway. Counting of the votes will be held on May 23. Voting of the remaining 118 constituencies will be held in two phases slated on May 12 and May 19.

Polling in West Bengal’s 42 Lok Sabha Seat is being spread on all seven phases. 17 Lok Sabha seats of the state will go to polls in remaining two phases. While voting in 7 seats under phase-V is underway.