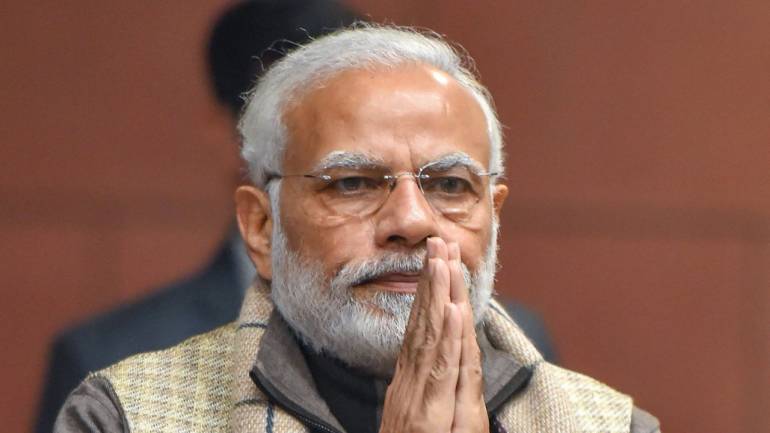 Ayodhya, May 1 (IANS) Sharpening his attack on the opposition Prime Minister Narendra Modi on Wednesday asked the voters in Uttar Pradesh here to be alert while pushing the EVM button as the inevitability of a terror strike depends on it.

“The terrorists are waiting for a weak government to come to power at the Centre to once more strike the nation,” Modi said cautioning the crowd against voting for the “mahamilawati” (hodgepodge alliance) and said it was only the BJP-led NDA that had kept the terror strikes at bay.

“My first priority is national security,” Modi thundered to the rousing noises of blowing of conches in the background. “We have created a new India, that does not fiddle with others, but is not to be fiddled with either.

“We will not think twice when attacked be it at home or the frontier, to enter into the opponent territory to end the terrorists.”

He reminded the crowd of the Hindi saying, “Savdhani hati, durghatna ghati”, and cautioned them to vote for the BJP, which alone can safeguard the country.

Modi told the people gathered at the Ambedkar Nagar rally that they should allow the spirit of the dead soldiers to help them chose the right candidate.

He further trained guns towards BSP Supremo Mayawati and said, ‘Be it SP, BSP or Congress, it’s necessary to know their reality. Behen ji used the name of Babasaheb Ambedkar but she did everything just the opposite of his principles. SP used the name of Lohia ji but they destroyed the law & order situation in UP.’

PM Modi in Ambedkar Nagar: Be it SP, BSP or Congress, it's necessary to know their reality. Behen ji used the name of Babasaheb Ambedkar but she did everything just the opposite of his principles. SP used the name of Lohia ji but they destroyed the law & order situation in UP. pic.twitter.com/wlMONky2Bg

General Elections 2019 has already started and is being held across seven phases starting April 11 to May 19. Phase-V is slated for May 6. Uttar Pradesh for its 80 Parliamentary seats will poll in all seven phases till May 19.