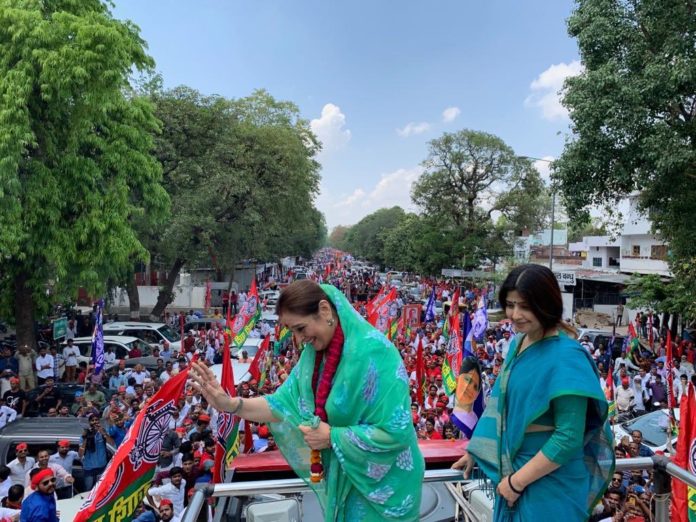 Poonam Sinha, wife of actor-turned Politician Shatrughan Sinha has on Thursday filed nominations for Lucknow Parliamentary Seat in Uttar Pradesh. She will be taking on BJP Nominee and Union Home ministry Rajnath Singh.

She has joined Samajwadi party on Tuesday after meeting Dimple Yadav. She will be a joint Candidate of Grand Alliance comprising BSP–SP-RLD.

After following nominations, She along with Shatrughan Sinha held a massive roadshow. Many Top Leaders from the party including Dimple Yadav were also present in the roadshow.

It is noteworthy that Shatrughan Sinha has recently joined Congress after quitting Bharatiya Janata Party. He has been named by Congress from Patna Sahib against BJP’s Ravi Shankar Prasad.

Congress has named Acharya Pramod Krishnam from the parliamentary seat.

Soon after Poonam Sinha joined Samajwadi Party, Ravidas Mehrotra of Samajwadi Party appealed to the Congress that do not field your candidate from here so that BJP can be defeated.

Rajnath Singh earlier in the week filed his nomination from Lucknow seeking his second term.

Uttar Pradesh which has a total of 80 seats will go to polls in all seven phases starting from April 11. The Lok Sabha Seats of – Gautam Budh Nagar, Ghaziabad, Meerut, Kairana, Saharanpur, Muzaffarnagar, Baghpat and Bijnor have already voted on April 11. While other Others 8 seats of the state is voting today as a part of the Phase-II voting.