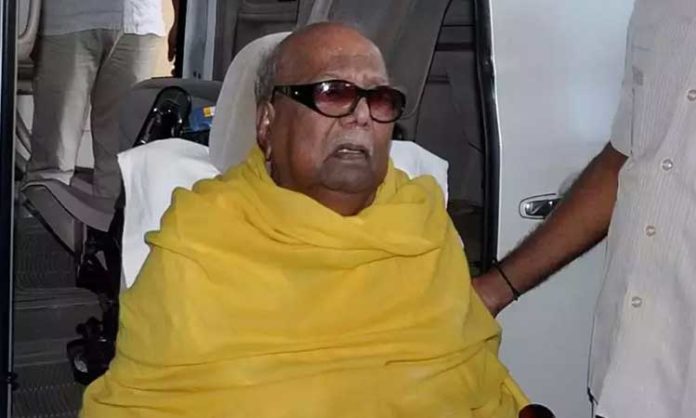 MK Alagiri, elder son of the recently deceased Dravida Munnetra Kazhagam(DMK) President M Karunanidhi after visiting his father’s grave at the Marina beach on Monday, gave a statement which has created uproar inside the party. In not so many words, the expelled leader challenged the succession of his younger brother M K Stalin as the party chief.

ANI quoted Alagiri as saying, “My father’s true relatives are all on my side. All the supporters in Tamil Nadu are on my side and are encouraging me only. Only time will give the answers… that is all I am willing to say now.”

His statements come just a day before DMK’s urgent executive committee meeting is to take place where a resolution will be adopted condoling the death of DMK supremo Karunanidhi who died last week.

M K Stalin was appointed as the working president of the party in January 2017 after Karunanidhi’s health started deteriorating and he withdrew from public life.

According to The Hindu, in the executive meeting to be held on August 14, a date will be discussed for the general council meeting in which Stalin will be anointed as the President of DMK.

The Time of India reported, “It is still early days. We have the emergency executive committee meeting of the party on Tuesday and the general council has 80 days’ time to meet and decide the future course of action and on party postings and positions. Meanwhile, we have been asked not to talk about Alagiri,” a party spokesperson said.

Alagiri was banished from the party in 2014 citing ‘anti-party activities and derogatory remarks’ as the reason. As a blow to the elder brother, Stalin was declared as Karunanidhi’s political heir in the same year. Alagiri once had a powerful influence in the party and became the Chemical and Fertilisers Minister in the Manmohan Singh led UPA government in 2009.

K Anbalagan, general secretary of the DMK chided Alagiri and said, “Alagiri has no right and no place to comment on Stalin as he is not a part of the DMK. He was the one who was about to attack our ‘Thalalpathy’. He is making these statements out of jealousy,” reported News18.

Former Union Minister Alagiri who has been lying low in politics since his banishment has created a stir through his remarks capable of creating rebellion in the DMK.

“Alagiri will now demand his right as he is also Karunanidhi’s son and was instrumental in the DMK’s victory in southern districts when the party was in power the last time,” said political analyst Shyam Shanmugaam to The New Indian Express.