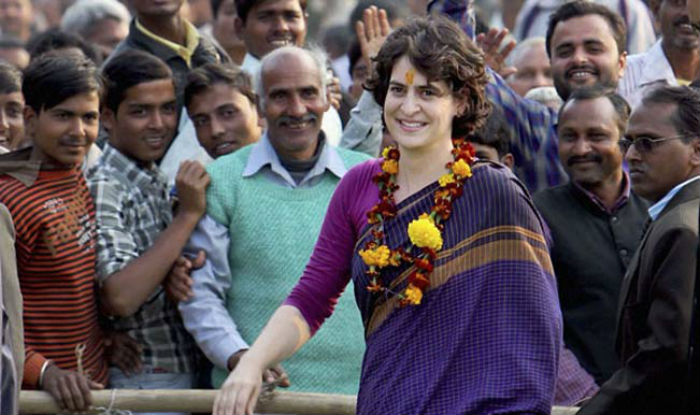 Congress Uttar Pradesh East General Secretary Priyanka Gandhi on Wednesday during her visit to brother Rahul Gandhi‘s parliamentary Seat Amethi asserted that ‘she will contest the upcoming National Elections if her party (Congress) wants her to’. Her comment came when her party has already announced candidates on more than 48 Lok Sabha Seats of the state.

Responding to continuous queries of scribes, the newly appointed General Secretary said, ‘Why Not’. And Suddenly pitched questions towards a reporter even you can contest the upcoming national polls. She added if her party wants her to be in the electoral fray she is ready to be in.

Priyanka Gandhi Vadra on being asked if she will contest in #LokSabhaElections2019: I've not decided yet; If my party asks me to contest, I will definitely contest. My wish is to work for the party. pic.twitter.com/r7oQlLa1qN

Her remarks about contesting the mega battle of ballots came in Amethi from where his brother and Congress President Rahul Gandhi is a Member of Parliament. She was in the district to campaign for her party. Priyanka Gandhi will on Thursday go to Rae Bareli, the Parliamentary Constituency of her mother and UPA Chairperson Sonia Gandhi.

Speaking to reporters she racked up BJP and BSP for taking at Jibe at Congress ‘NYAY’ Scheme. BSP Supremo Mayawati had tweeted that the BJP “is right” when it called NYAY a Congress “bluff”.

READ: Check out the full list of Congress for Lok Sabha Polls 2019

She said, ‘Congress doesn’t make peoples fool, Congress do what they say’.

NYAY, or the Nyuntam Aay Yojana, is the party’s top promises in a run-up to the general elections 2019. The Scheme aimed to give ₹72,000 annually for India’s poorest families if his party (Congress) voted to power in the General Elections 2019.

Speculations about her contesting the mega battle of ballots were on height ever since she has been appointed as Congress General Secretary. Days after her appointment as UP GS for East, Posters urging Priyanka Gandhi to contest the coming Lok Sabha elections from Varanasi to challenge the Prime Minister Narendra Modi came up in the holy city.

However, this was the first time that newly inducted Gandhi has revealed her willingness to contest Polls. Priyanka Gandhi is currently busy in reviving her party to take on SP–BSP Alliance and BJP in the upcoming National Elections. Congress has taken many small allies including Apna Dal faction, Mahan Dal and other along with it in its mission UP.

80 Seats of Uttar Pradesh will vote in all seven rounds of the election from April 11 to May 19. The Counting of votes for the mega battle of ballots will take place on May 23, four days after last round of polling.