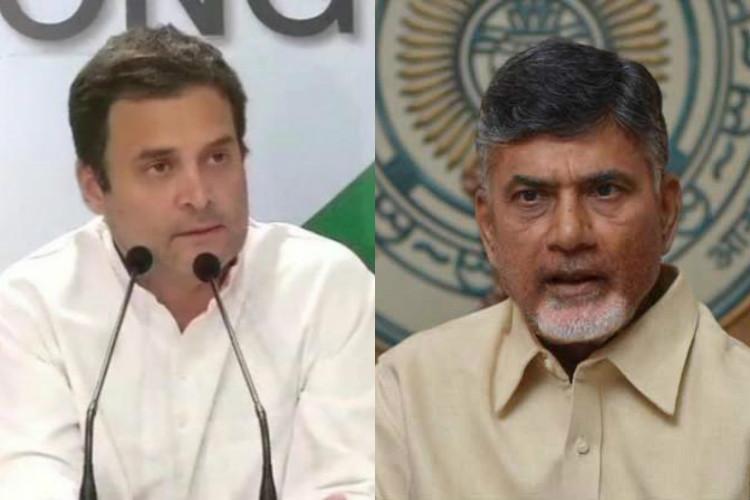 In a move to strengthen the electoral partnership before the state assembly elections and general elections of 2019, The Telugu Desam party Chief, Chandrababu Naidu and Congress Supreme Rahul Gandhi will hold a joint election gathering. According to the sources, the joint rally is likely to hold in the last week of November in Hyderabad.

The Congress, TDP, Telangana Jana Samiti and CPI have joined hands to form a ‘Grand Alliance’ for the December 7 Assembly Polls in Telangana. However, the major opposition, Congress is contesting on the majority of seats in an assembly of 119 seats. The TDP will field its candidates in 14 seats, the TJS in 8 while CP in 3. The results of the 119 seats assembly elections will be declared on December 11.

However, in a jolt to a newly made alliance, the TJS Vice President shows dissatisfaction over seat sharing and told reporters that the Telangana Jana Samiti would contest 12 seats against 8 allocated by the Congress.

Efforts to cement such an alliance are being led by Naidu who has held meetings with top opposition leaders, Mamata Banerjee, HD Kumaraswamy, MK Stalin, Deve Gowda in recent weeks. So far, the Congress, TDP, Aam Aadmi Party, JD(S), TMC and NCP have confirmed attendance for the meeting.

Naidu, who broke up with BJP led NDA said all parties will decide the future course of action after the meeting.