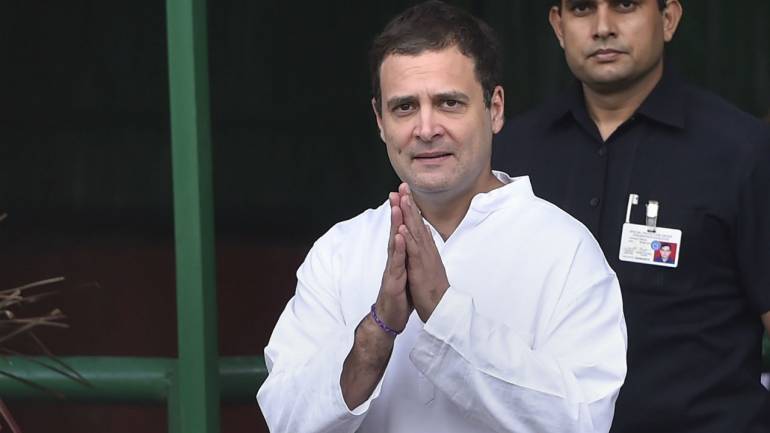 Congress President Rahul Gandhi will be visiting Madhya Pradesh for an election tour on Friday, 16th November. He will be campaigning for Congress candidates in four assembly constituencies. Jyotiraditya Scindia, President of Election Campaign Committee will also be addressing rallies and public meetings for various candidates.

After the distribution of tickets, prominent leaders will be campaigning vigorously for their candidates. It is expected that around 100 public meetings will be conducted in 14 days. Rahul Gandhi, who has already held rallies in Bhopal, Indore, Gwalior and Jabalpur, will now be focusing on the tribal belt of the state. The Congress party is also trying to woo the voters in rural areas. Hence, Congress President will be addressing four public meetings in Bundelkhand, Mahakaushal and Vindhya.  Mr. Gandhi will first arrive in Deori of Sagar district. After this, he will attend the election rally of Arjun Singh Kakodia, Congress candidate of Barghat assembly seat of Seoni district and will address Sanjeev Uike’s gathering in Mandla at 3:30. He will also address the election rally of Dhyan Singh in Jaysingh Nagar assembly seat of Shahdol district. After which he will leave for Delhi. Election Campaign committee president Jyotiraditya Scindia will also address 19 public meetings and two road shows from November 12 to 14.

Election Campaign Committee President Jyotiraditya Scindia will start his campaigning 12th November. The cadidates for whom he will be pitching are Gendaralslal Rawat, the candidate of Sindhwa; Jhuma Solanki, candidate from Bhikangaon; Vijay Singh Solanki of Bhagwanpura, Ravi Joshi of Khargone, Umang Singhar of Gandhani, Tulsi Silavat of Sanwar, Saturnarayan Patel of Indore-5. On November 13, he will conduct roadshows in favor of Ujjain North candidate Rajendra Bharti, for Parshuram Sisodia of Malhargarh, Murli Morwal of Badnagar, Manoj Chaudhary of Hatpipali and Manoj Chaudhary. After this he will hold meetings in Mohan Sengar assembly constituency in Indore two. On November 14, he will address the rallies for Babu Jindal of Sindhiya Shyopur, Ramniwas Rawat of Vijaypur, Baijnath Kushvah of Sabargarh, Banwari Lal Sharma of Jaura, Andal Singh Kansana of Sumavali, Raghuraj Singh Kansana of Murena, Munnalal Goyal of Muren and Pravin Pathak of Gwalior South.

State unit President Kamalnath will also address rallies from 14th November in Udaipura and SIlwani. While on 15 November he will visit Hoshangabad, Sivni Malwa and Sohagpur. After which he is expected to address 50 rallies in 12 days.

Assembly elections in Madhya Pradesh will be held on November 28.