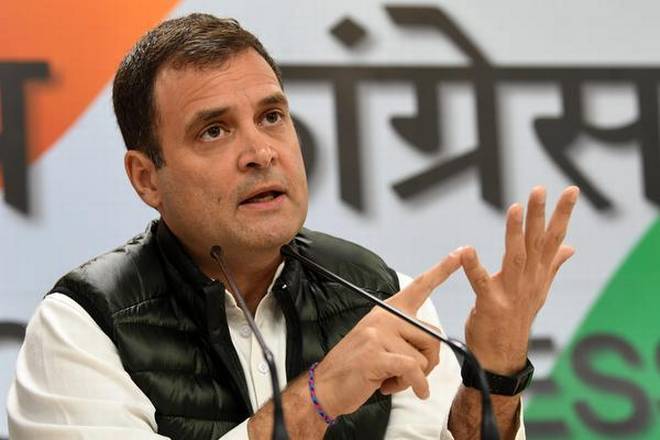 While Confirming that Congress will not join hands with Aam Aadmi Party in Delhi, its National Chief Rahul Gandhi on Monday urged party’s Booth Workers to win all seven seats in the national capital in the upcoming General Elections 2019. Congress President Rahul Gandhi comment came in the event organised by the party – Mera Booth Mera Gaurav – in order to reach out its Booth Workers ahead of the Lok Sabha Polls 2019. The Convention was organized at Indira Gandhi Stadium.

His remarks came days after DPCC Chief Sheila Dixit who had on Saturday after meeting with Congress Former President and UPA Chairperson Sonia Gandhi said that There is no alliance yet”. Her remarks however triggered Buzz on rethink over the alliance with Arvind Kejriwal party.

While speaking in the event, he also trained guns towards Bhartiya Janta Party led Central Government and Prime Minister Narendra Modi. Slamming PM over Dokhlam Issue, Congress Chief said, ‘When Doklam issue was on, PM Modi went to China and held a meeting without agenda. He bowed before China with folded hands and said keep Doklam and that no one in India will come to know and the media will be tackled. Matter over. This is the reality of Modi ji”.

READ: AAP Denies Buzz About Rethink Over Alliance With Congress in Delhi; Says ‘Will Contest on all 7 seats’

Rahul Gandhi: When Doklam issue was on, PM Modi went to China and held a meeting without agenda.He bowed before China with folded hands and said keep Doklam and that no one in India will come to know and the media will be tackled.Matter over.This is the reality of Modi ji pic.twitter.com/ILt6qqXeNp

Rahul Gandhi in the event interacted and encourage booth workers and gave tips on how to corner BJP and AAP in Delhi that has 7 Lok Sabha seats.

Earlier in the day, Aam Aadmi Party Senior Leader Gopal Rai again asserted that his party (AAP) is not in talks with the Congress for an alliance in National Capital. He further added that AAP is gearing up for Lok Sabha Polls 2019 and will contest on all 7 parliamentary seats on its own in the National Capital.

Congress has been under pressure from other opposition parties to tie up with AAP in Delhi to avoid Division of Votes. The Maharastra ally of Congress, Nationalist Congress Party led by Sharad Pawar on Thursday (last week) pushed Congress to go with AAP in National Capital for Lok Sabha Polls 2019.

With Poll dates are announced, all the parties are leaving no unturned to outdo each other and woo voters in the upcoming battle of ballots. General Elections are slated for April-May this year that would spread on Seven Phases starting from April 11 to May 19. Election Commission had on Sunday declared schedule for General Elections 2019.