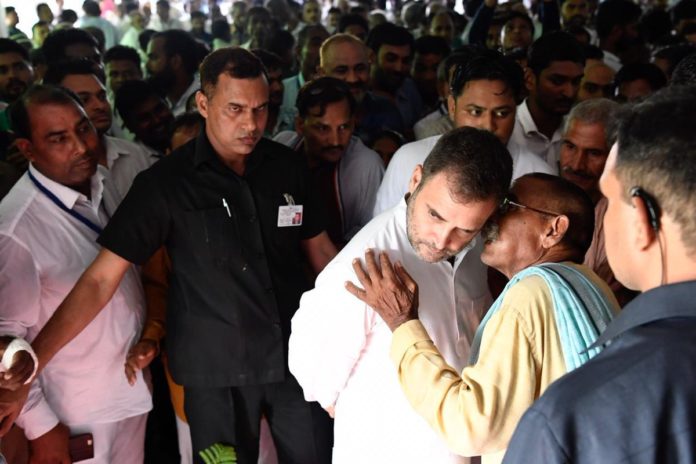 Rahul Gandhi with workers of Congress party, in Amethi. This is his first visit to the constituency, post the loss in Lok Sabha elections 2019. pic.twitter.com/SUExmbhNly

Former Congress Chief also met the party workers and urged them to be prepared for a long battle.

While earlier in the day, Rahul Gandhi also visited the home of Congress worker Ganga Prasad Gupta who had died recently and offered condolences to his family in Gauriganj.

Earlier in the day, Rahul Gandhi thanked all his followers on Twitter as he reached the 10 Million mark on the social networking site. ’10 Million Twitter followers – thank you to each and every one of you! I will celebrate the milestone in Amethi, where I will be meeting our Congress workers & supporters today’, Rahul Gandhi said in a tweet on Wednesday.

10 Million Twitter followers – thank you to each and every one of you! 🙏🙏

I will celebrate the milestone in Amethi, where I will be meeting our Congress workers & supporters today.

This was Rahul Gandhi’s first visit to Amethi, almost two months after it faced a crushing defeat in the national polls held in April-May this year.

His visit came days after Rahul Gandhi officially step down from Congress President Post saying that he is responsible for the loss of the 2019 elections.

In a four-page letter, He stated that accountability is critical for the future growth of our party. ‘It is for this reason that I have resigned as Congress president’, said Gandhi in his four-page resignation letter.

Rahul Gandhi has entered the Lok Sabha for the First time in 2004 contesting from  Amethi Lok Sabha Seat. Amethi in the past has been represented by Sonia Gandhi, Rajiv Gandhi, and Sanjay Gandhi. Barring 1977, and 1998, Amethi, before 2019, had always elected a Congress Nominee.