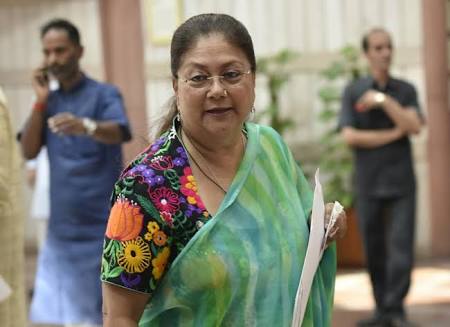 To lure the tribal farmers which have always been a vote bank of Congress, Raje announced in a gathering at Choti Sadri in Pratapgarh district to waive agricultural loans along with principal, interest and penalty taken by the farmers from cooperative banks. This will help the farmers in releasing 15,000 acres of land, which they have pledged with the banks against the loan.

Raje also declared that the families below the poverty line in the TSP area will be provided 50 units of free domestic electricity per month.

For a long time, farmers have been demanding loan waivers and higher MSP for procurement of agricultural products from the Rajasthan government. So this move is “unlikely to soothe nerves of farmers”, writes Economic Times.

All Indian Kisan Sabha President Amra Ram asserts, “In 4 years more than  100 farmers have committed suicides due to debt burden. Six farmers have killed themselves in last couple of months only due to a drastic drop in garlic prices. A few days ago, a farmer in Nagaur committed suicide due to debt. If the government is so farmer-friendly then why are we forced to commit suicides?” reports ET.

Rajasthan Congress chief Sachin Pilot called the announcement a mere artifice. Pilot added,”Government has only three months left. Such announcements are not going to be implemented. Even farmers know this. The government has completely ignored the interest of farmers.” reported ET.