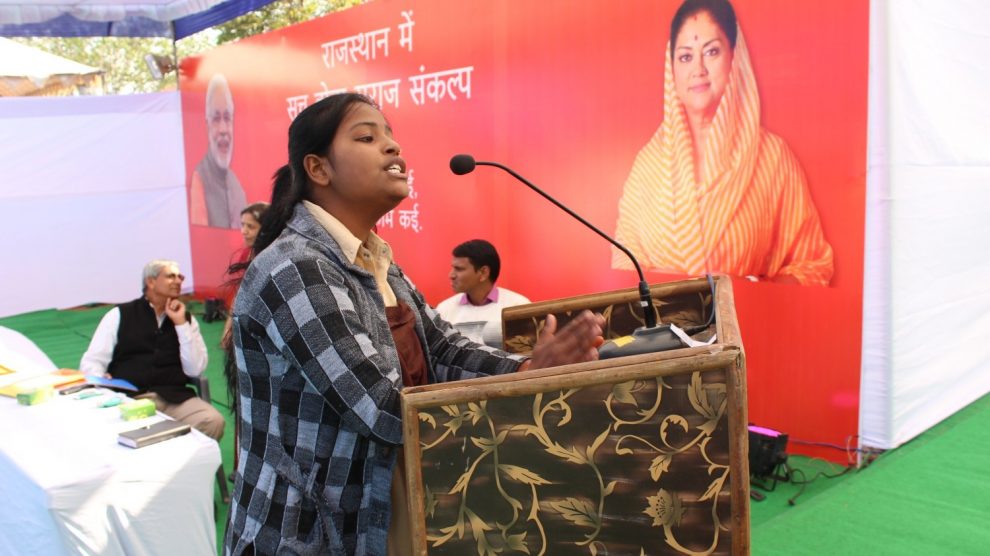 To celebrate 4 years of rule, Raje govt organised a three-day exhibition in Jaipur, where 400 students were compelled to attend the event.

The Vasundhara Raje government completed its fourth year in power in Rajasthan and to celebrate this a three-day exhibition at Ramlila Maidan in Jaipur by the government. In the fair, the Raje government displayed its development work and achievements in about 50 stalls. Also, it was made compulsory for around 400 students from 11 private schools to come and participate in different competitions organised.

Usually, the students of government schools and colleges become a part of such functions, but for the time being, they are having the half-yearly examination, so students from private schools were ordered to participate. Activities such as painting, jingle writing and extempore speech competitions based on government schemes including ‘Swachh Bharat Abhiyan’, ‘water conservation’ and ‘Beti Bachao, Beti padhao’ were organised. During a conversation with the media, a teacher from a private school informed that “We had orders from the district education office to bring 35 students from our school for three days to participate in the painting, jingle writing and extempore event at the government exhibition.”

When reached out, Ratan Singh Yadav, district education officer said that “Normally, students of government schools are called to participate in such events but since they are having their half-yearly examinations now, we decided to call private schools of the city to take part.” It was also confirmed that the orders sent to the private schools for the mandatory participation of students were given by Ratan Singh on the direction of the collector. Trying to cover up the compulsory participation of the student the district education officer also said that “Participation in competitions will make the students bold. Why see it in connection with any government?”

Further defending the government and forcing the student to attend the celebration, Deepak Shukla, assistant district education officer said that the order had nothing to do with politics and the topics for different activities were based on environment and social evils, which would only be helpful for the students. He also added that the compulsion was necessary so that the required number of strength could be present at the event.

Significantly, in the painting competition, the artwork of the students was filled with drawings of Prime Minister Narendra Modi, the Swachh Bharat Abhiyan, and cows. Even the jury members for the competition were of the view that Modi’s contribution on the issue of clean India should be present. A jury member of the painting competition, Rajni Balasharma, said that “We will see whether the students have in their minds what the prime minister says about Swachh Bharat Abhiyan or not.”

Another jury member Sudharshan Khullar was of the view that the organising such competitions and mandatory participation of students were necessary as these children are the best means to promote and educate the other about the schemes of the centre and the state governments. “This is just about awareness of the government schemes. Whatever is taken up by the central government is meant to be followed by the states too. ‘Swachh Bharat Abhiyan’ and ‘beti bachao, beti padhao’ are central government schemes. By participating in these events, the students will get to know what the government of their state is doing. They are the best carriers to pass this knowledge to their families and neighbours,” he said.

On the other hand, the jingle writing competition was flooded with words like ‘vikas’, ‘naya Hindustan’ and ‘Bharat mata’. For the speech competition, students were asked to speak for three minutes on ‘Clean India is happy India’, ‘importance of the mission’, ‘its relevance’ and ‘students’ contribution in the mission.’

During the speeches, all the credit for clean India mission was given to the initiatives of Prime Minister Narendra Modi. The students underlined that no Prime Minister or government had ever before talked about cleaning India. “Before the Swachh Bharat Abhiyan came, people were not aware what dirt is, why open defecation is bad and how we can keep the nation clean. It was only after our prime minister launched the clean India mission that the masses became aware. Today, our city is clean and we wish to keep it so,” a student said.

Talking about the motive to organise such events and make the participation of the students compulsory,  Rajiv Gupta, former professor of sociology at the Rajasthan University said that “This has never happened in the past. No programme relating to any government has been discussed. You can have an academic seminar relating to certain issues or policies but no programme has ever been discussed at this scale.” He also pointed out that since the state is going to polls next year, the government is now trying to gain popularity and divert the attention of the masses. He further added that “They cannot provide employment, give adequate learning, create new content structure, new degree programmes. So, the alternative left with them is to involve the students in those areas which are not of their interest but of the interest to the government.”

Similar to this one, the government had made it compulsory for the students to attend a seminar being organised to create awareness about the importance to save the rivers, organised by the Rally for River under Sadhguru Jaggi Vasudev. Around 3000 students had assembled at the Jaipur Exhibition and Convention Centre in Sitapura, to attend the campaign and almost all of them unaware of the reason for them attending the programme. They gathered there only because they were given orders to compulsorily attend the ‘Rally for Rivers’ event on September 28.

Party lost the assembly elections but has won morally: Congress
Hardik to focus on campaign against communal distrust, EVMs & reservation