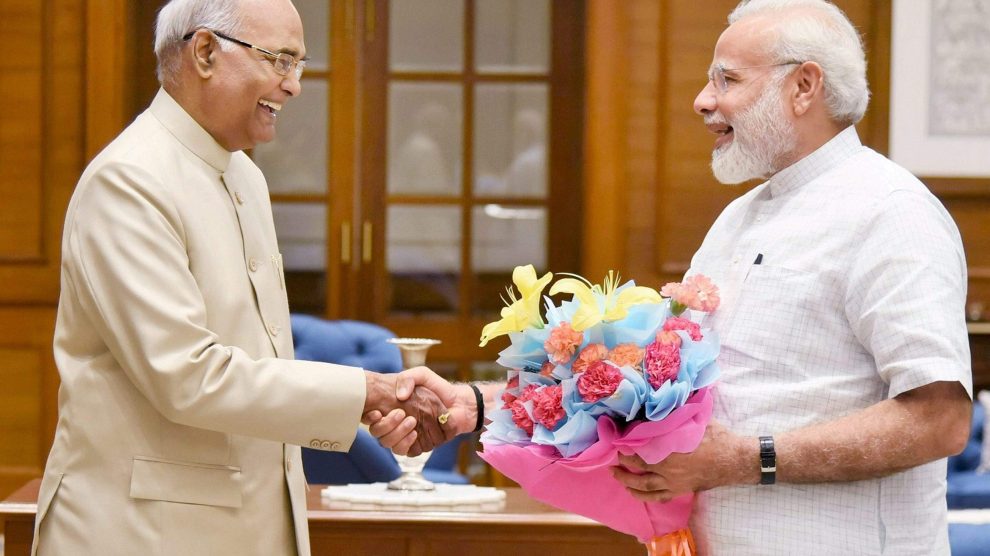 Ram Nath Kovind, was named as NDA's Presidential candidate. He met Narendra Modi at his residence with Shah on Monday evening & thanked him.

Ram Nath Kovind was announced as the NDA candidate for the post of President of India, by Prime Minister Narendra Modi and BJP Chief Amit Shah.

Seventy one-year-old Kovind is a Dalit leader from Kanpur. He is an advocate by profession and practices in the Supreme Court. After graduating in law from a Kanpur college, Kovind had gone to Delhi to prepare for the Indian Administrative Services (IAS) entrance test. He failed to pass it twice but made it in his third attempt. He, however, did not join as he was selected for the allied services and started practising the law.

In 1977, before he joined the BJP, Kovind worked as the private secretary of then prime minister Morarji Desai. Ram Nath was president of the BJP Dalit Morcha from 1998 to 2002. He has also been President of the All India Koli Samaj as well as the SC/ST representative at IIM-Calcutta. He represented India in the United Nations in New York and addressed United Nations General Assembly in October 2002.

He is a moderate hindu who believes in the philosophy of the RSS. His intelligence is trusted by the RSS leaders in all matters. Kovind has been expanding and mentoring an organisation named Divya Prem Sewa Mission on Chandi Ghat in Haridwar since 2000. The organisation is inspired by the vision of Swami Vivekananda and is based on the hindu ideals of sewa, sadhna and sambodhi (service, dedication and knowledge). The organisation was originally started in 1997 by Aashish Gautam who has been a pracharak with the RSS that works exclusively with lepers and their families.

On October 8, 2000 when he came to Haridwar, he saw the children of the leper patients did not have adequate facilities. He was pained to see them sleeping in tents. He immediately donated Rs 25 lakhs and got the ganga vatika and pradeep vatika – hostels for girls and boys built as part of our vande mataram project built. Since then there has not been any year that he missed visiting the place. He sponsors the education of at least two or three children every year and has got plenty of other people involved in this cause.

Kovind has mentored the Sangh extensively on its reach out efforts towards dalits as part of samajik samrastha. His favourite words that he uses in all his speeches are that every one of us needs to work to the best of this shamta (capacity), samata (maintain parity), namrata (humility) and mamata (love). As a member of the SC commission, Kovind had undertaken a tour of the entire country meeting dalit organisations, listening to their woes. Kovind is a popular face in the RSS who is known to have earned the respect to top RSS leaders such as Suresh Bhaiyyaji Joshi and Krishna Gopal.

UP BJP spokesperson Chandramohan said Kovind was the ideal pick to further the party’s sabka saath, sabka vikaas vision as he believed in “mentoring people and convincing them to work unitedly.” An associate recalled that when he unsuccessfully fought elections from Ghatampur in Kanpur in 1990 he kept his word of maintaining his association with the place. “He said he cannot betray the one lakh people who wanted him to be their sansad. He keeps visiting the place.”

Kovind’s Dalit credentials are greatly valued by the party. After the announcement made by the BJP Chief, Ram Nath Kovind met Narendra Modi accompanied by Amit Shah on Monday evening. The Bihar governor thanked Modi and BJP for reposing faith in him for such a big responsibility.

The opposition is likely to put up a candidate against him, Meira Kumar also belonging to the dalit may be the proposed candidate. The elections will be held on 17 July and the results will be declared on 20 July.