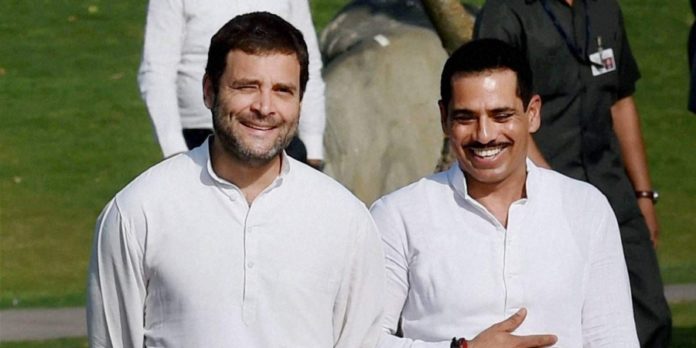 Businessman and Brother-in-law of Congress President Rahul Gandhi, Robert Vadra on Sunday announced to campaign for the Congress in a run-up to the national elections 2019. Business Baron while responding to query by a scribe said, ‘Yes, I will campaign all over India for the party after filing the nominations.

Both the stronghold seats of the party will go to polls on May 6.

Robert Vadra to ANI when asked if he will go to Amethi and Raebareli at the time of filing of nominations by Rahul Gandhi and Sonia Gandhi: Yes. https://t.co/mTzwT5SmTi

Robert Vadra is currently facing continuous quizzing from the Central Probing Agency in connection with a money laundering case.

In February earlier this year, Vadra hinted his possible venture in the politics. He further hinted that he may contest the elections from his Hometown Moradabad in Uttar Pradesh.

On being asked from which constituency he will contest the elections from, Vadra added as reported by ANI, “I was born in Moradabad and have spent childhood in Uttar Pradesh and I think I understand that area. However, I can stay anywhere and I believe I will be able to understand them.”

However, later in the first week of March, he said he will enter the politics only after he gets ‘clean chit’ in the Money Laundering Cases which are under Investigation by the Enforcement Directorate.

However, the Bharatiya Janata Party leader and its nominee against Rahul Gandhi from Amethi Smriti Irani took a jibe at Robert Vadra’s announcement of campaigning for the party. She said as quoted by ANI, ‘I would only like to say this that Robert Vadra can go wherever he wants, but the people are advised to keep a close watch on their lands,” she said.

Robert Vadra who is facing a continuous grilling from ED had on April granted bail by Special Court.

Congress had in January this year appointed Priyanka Gandhi’s as its General Secretary for UP East and has been assigned the responsibility of 41 Parliamentary Seats.