The issue of the Rohingya immigrants has become a matter of concern for all the governments. While the Indian government is on the grounds that the Muslim Rohingyas are illegal immigrants and can be a threat to the national security, it is also trying other countries to curb the situation.

Indian Foreign Home Minister Sushma Swaraj on Thursday night held a telephonic conversation with the Bangladesh Prime Minister Sheikh Hasina over the issue of Rohingyas. During the call, she said that India’s situation was same as that of Bangladesh and assured that the Indian government will do everything possible to help solve the Rohingya in flirtation issue.

The figures record that after the terror attack on Myanmar Army by terrorists in the Rohingya ranks and the counter attack of the army, around 4 lakh Rohingyas have fled to Bangladesh in the month of August. India record migration of around 40,000 Rohingyas in the country since Aug.

To solve the problem India is assisting Myanmar to deal with the migrating community and to stabilize back the socio economic condition of the country. However, after the recent visit of Prime Minister Narendra Modi to Myanmar, the Indian government is also closely working with the Yangon to detect the ISI ISI-sponsored terrorists within the Rohingyas and deal with them accordingly.

During the call, while Swaraj assured support from India, Sheikh Hasina expressed concern that the Bangladesh government will not be able to handle the situation for long. The Bangladesh Prime Minister said that though her government has allocated makeshift lands for the shelter of the migrating Rohingyas, but it would be a big challenge if they stayed for a longer time.

With the motive to help the struggling Bangladesh to overcome the issue of Rohingyas, the Indian High Commissioner to Bangladesh Harsh Vardhan Shringla on Thursday handed over 3 tonnes of relief material for the Rohingya refugees to the Bangladesh authorities.

All sought of speculations are being assumed all over the world regarding the Rohingya community. While on one hand, few are demanding generous and helping attitude towards the wandering community, few are saying the they are illegal immigrants and in future may become a threat to the security.

West Bengal Chief Minister and TMC Chief Mamata Banerjee on Saturday said that according to the UN Human Rights India should not deport the Rohingyas. She tweeted that “We do support the @UN appeal to help the Rohingya people.We believe that all commoners are not terrorists.We are really concerned” She said that the Modi government should be more benevolent in taking a decision regarding the deportation of Rohingyas.

We do support the @UN appeal to help the Rohingya people.
We believe that all commoners are not terrorists.We are really concerned

As per the Indian Constitution, India does not have any law pertaining to refugees. It has not signed the 1951 UN Convention on Refugees or the 1967 protocol, which bars the nations from expelling the refugees. The principle of non-refoulment which says that the refugees cannot be sent back to a country where their life is under threat is today a part of the customary international law. Which means that it is mandatory for every nation regardless of whether they have signed the UN Refugee Convention or not, they have to follow the non-refoulment law.

Even the BSP Supremo Mayawati urged the Indian government to take a humanitarian approach towards the Rohingya community who are wandering in search for safety and shelter.

While Deputy Interior Minister Kiren Rijiju in Aug had said that the government plan to deport at least 40,000 Rohingyas that are living in India without proper documentation. He has said that “as far as we are concerned they are all illegal immigrants, they have no basis to live here. Anybody who is an illegal migrant will be deported.”

Also, the Union Home Minister Rajnath Singh has said that the immigrating Rohingya Muslims are being considered as a security threat to Jammu and Kashmir and the government may soon call for the action of their deportation. 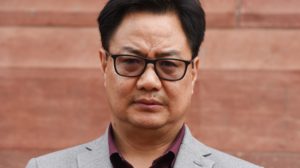