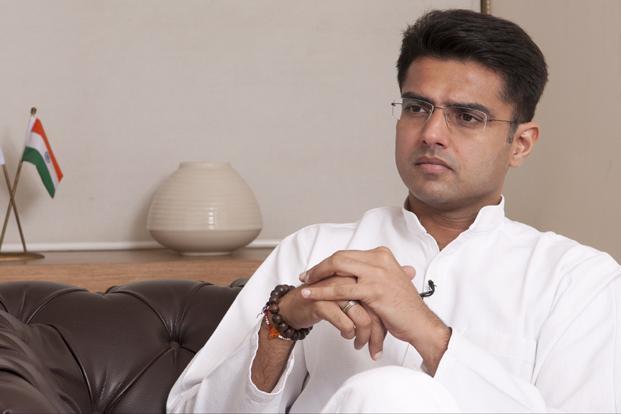 In a recent interview to PTI, the Congress party chief of Rajasthan, Sachin Pilot made a remark on BJP saying that there is ‘infighting’ and ‘groupism’ in the party as the CM Vasundhara Raje and party President Amit Shah are campaigning separately while affirming that all the leaders in his party are on the same side.

This comes as a counter-statement to Amit Shah’s allegations on Congress having a conflict in the party regarding the choice of Chief Ministerial candidate between Ashok Gehlot and Sachin Pilot. In his statement, Pilot said that it is, in fact, BJP who is having this issue of disaccord between Raje and Shah.

Taking a jibe on the reported tussle between Raje and Shah on the appointment of Madan Lal Saini as state party president, Pilot said, “Amit Shah could not for 75 days get the (state) president of his choice, he had to buckle under the pressure of Vasundhara ji and have a compromise candidate as the BJP president.”

Regarding the alliance of Congress with other parties in the state, he said, “As the state unit chief I have given my inputs and now it is up to the party President Rahul Gandhi to take the final decision”, reported PTI. Pilot was full of confidence that his party will win with a majority in the state.

After the recent revelation of French Ex-President Francois Hollande on Rafale issue, the opposition is staunchly alleging corruption in the BJP government. Talking about the same Pilot said, “PM used to claim, ‘na khaunga na khane dunga’ (will not indulge in corruption and will not allow others to indulge in it too), and now the government has been caught red-handed”. He also said that the BJP is answerable to the people on this ‘scam’ and that this is going to haunt the minds of the people in the upcoming assembly elections.

The state party chief has been touring Rajasthan as part of party’s Sankalp Yatra and is confident of party’s win in all the 5 poll-bound states as he claims that the party has gained a strong foothold in all these states. Rajasthan, Mizoram, Telangana, Madhya Pradesh, and Chattisgarh are going to hold assembly elections this year itself and both the parties are vehemently campaigning as the win in these polls are an important decision-maker in the upcoming 2019 general elections.

Talking about the crowdfunding initiative by the Congress he said that it is an AICC initiative. ” The idea is to involve the people as much as possible. So, apart from the small financial contributions that people want to make, it is also about the connections that people (are able to) have”. He further added that the Congress stands against the threats of corporate lobbies.

On the personal allegations made by Ms Raje on him, he said that the people are going to answer her through their votes. He also slammed the Raje government on her Gaurav Yatra and said since the Rajasthan HC has stopped the government from using public money, it has become a ‘damp squib’.

Ex Pak Minister backs Rahul Gandhi, says he is the ‘next PM’
Manvendra Singh, Ex-BJP MLA considering to joining congress; leaves it on people’s will
Comment