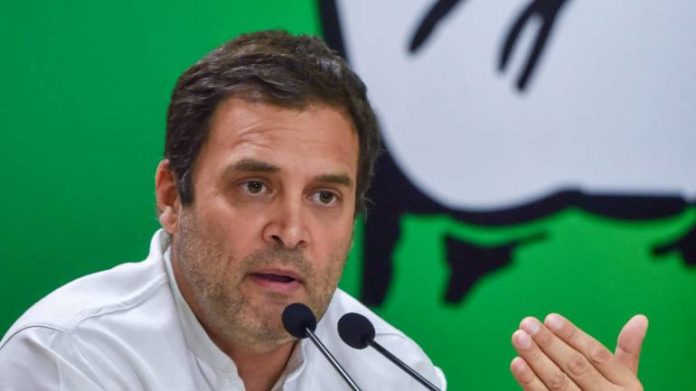 The Supreme Court on Tuesday issued contempt notice to Congress President Rahul Gandhi after expressing dissatisfaction over the response filed by him for his remarks on the Rafale judgment. The Top court further said that it will hear the contempt plea along with the review petition on April 30.

A Top Court Bench Headed by CJI Ranjan Gogoi and comprising Justices Deepak Gupta and Sanjiv Khanna said, ‘After hearing senior advocate Abhishek Manu Singhvi on behalf of Rahul Gandhi in the contempt petition we deem it fit to issue a notice to the respondent (Rahul) Gandhi’. The Court further also directed that SC registry to list the matter along with review petition for next Tuesday (April 30).

Petition of BJP MP Meenakshi Lekhi against Rahul Gandhi matter: Supreme Court issued notice to Rahul Gandhi after not being satisfied with his response. Next hearing on April 30 pic.twitter.com/AWHPN5M9Fh

Congress President on Monday filed a response in the Top Court in connection with a comment he made on PM Narendra Modi quoting Supreme Court Observation. Congress Chief in a response apologized to the Supreme Court and said his comments were made in the heat of the political campaigning.

He said that he regretted that he gave that statement quoting the Supreme Court to target PM Modi on Rafale Issue. He further said that his statements were used and misused by the political opponents.

Congress President filed a response came after the Top Court issued a notice in a plea filed by BJP MP. Bharatiya Janata Party outgoing MP Meenakshi Lekhi on April 15 filed a plea in the court seeking action against Rahul Gandhi for allegedly making remarks against Prime Minister Narendra Modi quoting an observation of the Top Court.

Earlier the Top Court had on April 10 giving a jolt to Centre unanimously rejected the objections raised by Government against the review pleas filed for apex court’s decision on the Rafale deal. The Top Court also allowed the admissibility of three documents in Rafale deal as evidence in re-examining the review petitions.

Commenting on Supreme Court Observation Rahul Gandhi had reportedly said ”I am really happy that the Supreme Court has accepted the fact that the Prime Minister of India had looted the money of the IAF and given to Mr. Anil Ambani. I had been saying this since months.”

BJP launched an attack of Rahul Gandhi for quoting the Supreme Court’s observation in the wrong way and mislead the people to attack Bharatiya Janata Party and Prime Minister Narendra Modi.