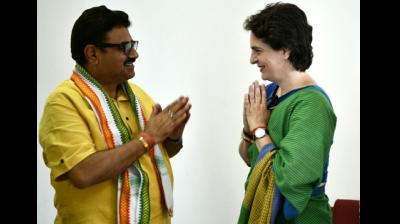 Union Minister Smriti Irani’s, ‘Man Friday,’ Ravi Dutt Mishra joined the Congress on Thursday. “Irani used to stay at Mishra’s house whenever she visited Amethi. Ravi dutt Mishra joins the party at a time when its President Rahul Gandhi and the party general secretary Priyanka Vadra are in tour on Amethi.

Irani has always been confident that she would win 2019 general elections in Amethi. When Rahul Gandhi had decided to contest from the Wayanad constituency in Kerala, Smriti Irani mocked fun of him saying, “bhaag rahul bhaag.”

Smriti had not completed here bachelors. In her affidavit the highest qualification degree written was, ‘Bachelor of Commerce part-1 from the School of Open Learning(correspondence), University of Delhi in 1994.

Talking about the Congress attacking her over her educational qualification, Union Minister Smriti Irani said, “In the last five years they have attacked me in every which way possible. I only have one message for them, the more you will insult me, the more you attack me, the harder I will work against the Congress party in Amethi.”