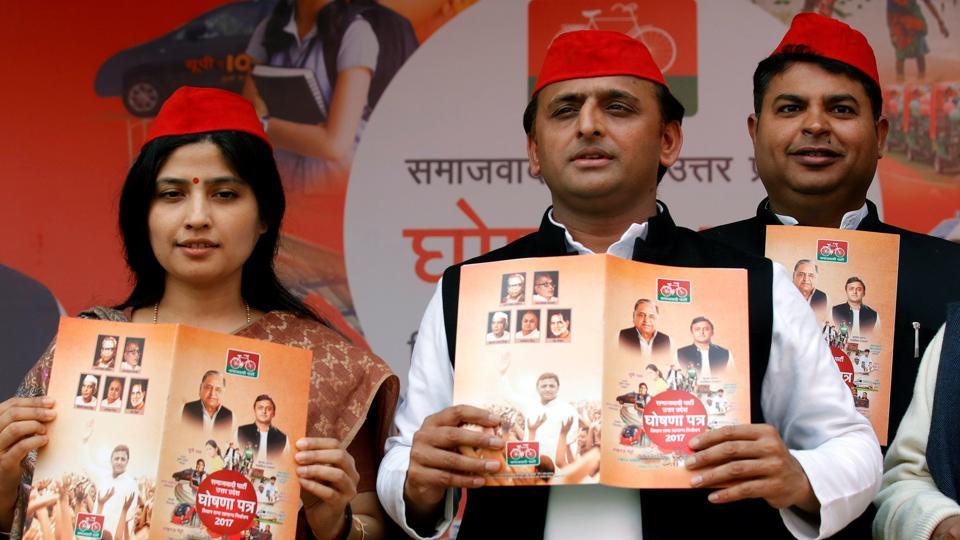 The SP today released the party’s vision document at the SP headquarters titled Mahaparivartan Through Social Justice. The document is a retort to the government’s announcement of 10% reservation for the economically weaker sections of the upper caste.

The party has refrained using the word ‘minority’ in the document.

The manifesto by SP has proposed a ban using Armed forces of any form in its political propaganda.

The vision document talks about the growth, infrastructure, employment, education, internal and national security, clean energy and equal right for women without discrimination.

The document announced by the SP leaders says that their community is dismissed as casteist giving unequal opportunities by the privileged. Akhilesh Yadav in his document claimed that the privileged people consider them as power hungry. However, this is not true. These are all the lies that the upper class makes to perpetuate oppressive power structures to benefit the few.

The document highlights the unequal distribution of wealth throughout the country displaying the wealth division. The document assured the upliftment of the rich and the degradation of the poor. The document reads, “The richest 10% of the population (uniformly the upper class) owns 60% of the total wealth of the country. The poor have struggled with income growth well below inflation. Half the population is residing in only 8% of the total wealth and thus leading to the deterioration of the economy of the country.

The SP leader Akhilesh Yadav proposed financing the increase in social transfers by imposing an additional 2% tax on the total wealth of households owning more than Rs 2.5 crores (about 0.1% of the Indian households). “This works out to be 1.1% of the GDP. We believe it is time to add a top income tax bracket for the ultra-rich who hide their income using complex structures and other methods. Doing so would unlock up to an additional 1% of the GDP.”