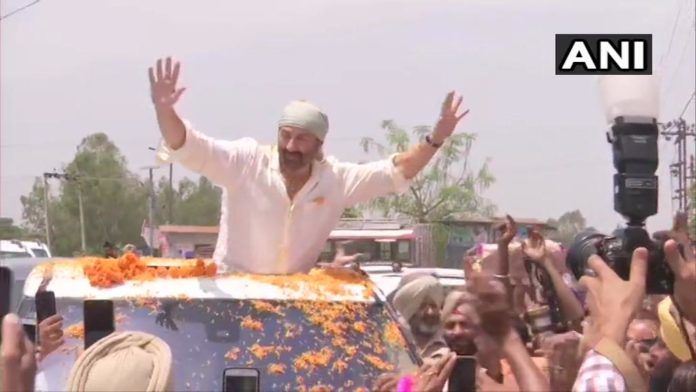 Actor-turned-politician and Bharatiya Janata Party (BJP) candidate Sunny Deol on Thursday holds a roadshow in Gurdaspur – a parliamentary seat from where Deol is making his electoral debut in the national polls 2019.

Jarkhar has recently questioned the actor’s knowledge about the constituency and slammed him saying that he has no vision to offer to the electorates of the Gurdaspur Parliamentary seat.

The actor had joined Bharatiya Janata Party on April 23 in presence of Union Minister Nirmala Sitharaman and Piyush Goyal. He has been named by the party for Gurdaspur Lok Sabha Seat in Punjab – a seat which was represented by Vinod Khanna in the past.

Punjab for its 13 Parliamentary seats will poll in a single phase on May 19 four days ahead of counting. General Elections have already started and is being held on all 7 phases from April 11 to May 19.

The Bharatiya Janata Party in the state has inked a pre-poll alliance with Shiromani Akali Dal. The NDA alliance in the national polls will take on  Congress, AAP, Punjab Democratic Alliance comprising seven parties including one floated by Sukhpal Singh Khaira.