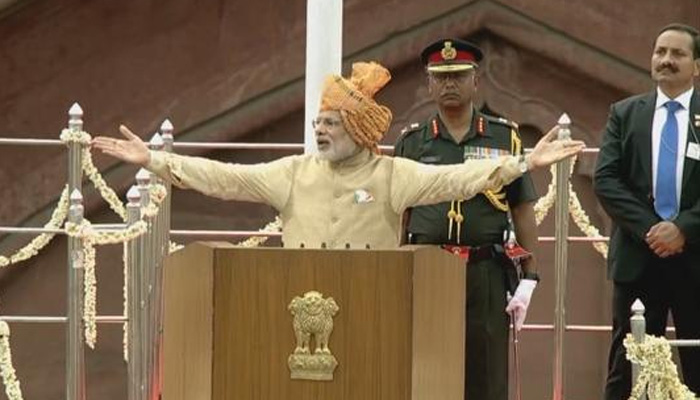 Prime Minister Narendra Modi paid a tribute at the Rajghat early morning on 15 Aug and marked the beginning of the celebrations for the 70th Independence Day of India. He then unfurled the Tricolour at the rampart of the Red fort amid high security.

Following the alerts about possible terror attacks, security was beefed up in the national capital on Monday, with around 47,000 personnel deployed ahead of Independence Day celebrations. The Red Fort and its surrounding areas within a five-km radius will be taken care of by about 90 companies of security forces (over 9,000 men). Officials said anti-aircraft and anti-drone guns have been deployed in and around Red Fort. An additional 500 closed-circuit television and high-resolution cameras have been placed in and around Red Fort.

After unfurling the Indian Flag the Prime Minister addressed the nation by thanking the people who contributed and sacrificed for the independence and the pride of the nation. He also greeted the entire nation saying that “Today the entire nation is also celebrating Janmashtami along with the Independence Day. Starting the speech Modi said, “We are celebrating 70 years of Independence Day today, within five years, the British had left the country because of our unity, we have to take Sankalplp of new India and take the country forward. There was a Mohandas Karamchand Gandhi once. People with cotton in their hands support Gandhi and eventually, the country got freedom, no one is big or small in the 1.25 crore Indians.”

He expressed his condolence over the recent deaths of more than 63 children in Gorakhpur, Uttar Pradesh and said that “There are times when conditions in nature become problematic.” Further highlighting the achievements of the government he said that the speed at which the projects are being completed has increased a lot. He mentioned that roads and railway tracks are being constructed twice as fast and over 14,000 villages have got electricity.

People of India stand shoulder to shoulder with those affected due to natural disasters & the tragedy in Gorakhpur: PM @narendramodi

” Further highlighting the achievements of the government he said that the speed at which the projects are being completed has increased a lot. He mentioned that roads and railway tracks are being constructed twice as fast and over 14,000 villages have got electricity.

Talking about one of the principle of minimum government, maximum governance, Modi said that the workings of the government have become transparent now. Nothing is hidden or disguised and with the help of the advanced technology, it is easier to reach out to people and educate them about the governance and steps taken by the government. He added that people are celebrating a Mahotsav of honesty. He appreciated the unity and cooperation with which the State and the Centre are working. He shared his experience of being a Chief Minister of Gujarat saying that, the state now no more have to fight and crave for anything from the Centre. He said that he has been a CM and known the importance of the development of the state. “It was like the Centre was the big brother. But since I have been chief minister also, I know how crucial states are for development. That is why our government focuses on competitive cooperative federalism. Whether it is Smart City initiative, construction of toilets, enrollment of GST, all our states are working shoulder-to-shoulder with the Centre for development,” said Modi. He also added that before 2019, the government will complete 99 yojanas for the farmer, including giving them full water supply and electricity and also provide them with good fertilizers and advanced technology.

Modi informed about the initiatives taken for the youth of India to promote and boost their talent he said that India needs to make job creators and not job seekers. “We have started a big Abhiyan for the banks to provide credit to our youths, we have taken big steps for creating institutes for world class education, the government has created 6 IITs, 7 new IIMs in the country,” said Modi. “We are nurturing our youngsters to be job creators and not job seekers” he added. The Prime Minister also said that 29 crore people have got bank accounts now. He proudly said that all those who are born in the 21st century, 1 Jan 2018 will be marked as an important day in the history of all their lives and 2018 will be a crucial year for them.

Speaking on the gravest problem that the entire world is facing, he said that there will be no leniency in terrorism. He told that after the surgical strike the entire world had to acknowledge India’s strength. He further added that India is not alone in the fight against terrorism, a lot of nations are helping India in this fight. He said that the world is working shoulder-to-shoulder with India against terrorism. Regarding the Kashmir issue, Modi said that the dispute will neither be solved with abuses nor with guns, it can only be solved by love and harmony. “Na gaali se samasya se sulajhne waali hai, na goli se sulajhne waali hai, parivartan hoga Kashmiri ko gale lagake,” he said.

Also remembering the sacrifices of the brave soldiers and on the basis of those who got gallantry award, Modi announced that the government will soon launch a portal through which the youth can find out about those who sacrificed for the country.

Talking about demonetisation Modi thanked the people for believing in him and cooperating with him. He said that “Today, I want to proudly tell people that within just three years, we have recovered Rs 1.25 lakh crore black money.” He added that the black money was used to run a number of shell companies and after demonetisation, more than 3 lakh shell companies were found out of which registration of 1.75 lakh companies are canceled. Eventually, paper currency will change to digital currency as digital transactions have increased now by 24 percent he informed.

Modi also highlighted the advantages of the implementation of GST, he said that it was almost like a miracle that GST was implied all over the country so smoothly in such short span of time. He added that everyone was shocked when GST rolled over successfully in India. Modi told that after the implementation of the one tax system truck drivers save 30 percent of their time in travel now.

GST has shown the spirit of cooperative federalism. The nation has come together to support GST & the role of technology has also helped: PM pic.twitter.com/UBBkQ3Q2yX

During his speech, Modi also praised the increasing strength of Women in India today. He spoke about the triple talaq matter expressing his grief on the loss of the women who suffered due to this issue. He also acknowledged the media for supporting the women in this revolution.

I want to mention those women who have to suffer due to 'Tripe Talaq'- I admire their courage. We are with them in their struggles: PM

Urging the nation to stand unitedly and fight against problems like corruption, terrorism, communalism and casteism the Prime Minister said “Chalta hai’ ka zamaana chala gaya, now people believe: Badal raha hai, badal sakta hai. There was once a slogan of ‘Bharat choro’, now, there needs to be a slogan of ‘Bharat Jodo’, he added. Concluding the speech Modi requested every Indian to a pledge to create a new Indian by 2022. “We will together create an India which will have water and electricity for the poor. We will create an India where a person’s income will be twice that of what it is now….We will create an India which abolishes terrorism, communalism and casteism…We will create a Bharat that is ‘Swachch’,” said Modi.