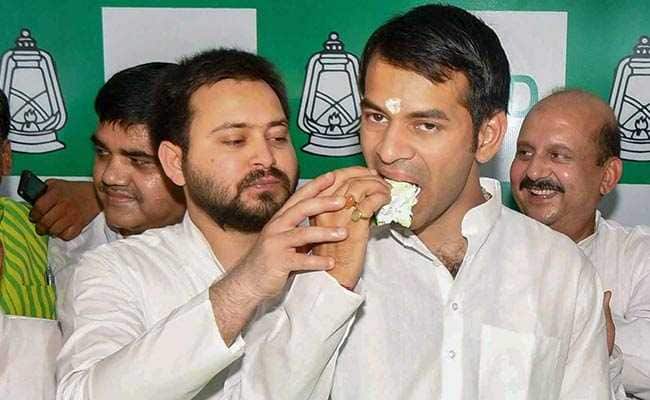 After massive poll setback and as the disenchantment within RJD grows, Tej Pratap Yadav, elder son of Lalu Yadav, who is said to be disgruntled with Tejashwi Yadav, has backed his younger Brother. Tej Pratap Yadav on Tuesday said, ‘Those who don’t like Tejashwi’s leadership can leave, be it mahagathbandhan or RJD, I will always stand by Tejashwi’.

He added that there is need that all the top leaders of Bihar’s Grand Alliance should come together and should fight like one. We lost the polls but should prepare ourselves for the future battle, Tej Pratap Yadav told ANI on Tuesday.

Yadav earlier tweeted, “Those who have any doubts on Tejashwi’s leadership should leave the party”.

Reportedly Tej Pratap Yadav had written a letter to Tejaswi after poll debacle and said, “Those who distributed tickets and contested elections should take the responsibility of the party’s poor show”.

The RJD Leader alleged that EVMs were manipulated which is why his party could not win a single seat. As quoted by ANI, Tej Pratap said, ‘Many Videos have gone viral on how EVMs are manipulated, even the Japanese company that manufactured EVMs does not trust them’.

Tej Pratap Yadav, RJD: Many videos have gone viral on how EVMs are manipulated, even the Japanese company that manufactured EVMs doesn't trust them. https://t.co/797BiwvkY6

In the meantime, RJD has called a meeting of all its MLAs and MLCs today to discuss party poor show in Recently held polls.

Bihar Leader of opposition Tejashwi Yadav who led the party in the polls, will chaired the meet which is slated to held at the residence of former Bihar chief minister Rabri Devi.

RJD who led the opposition alliance comprising Congress, RLSP, Jitan Ram Manjhi‘s HAM, among others faced a humiliating defeat in the national polls concluded on May 23. It has lost all the 20 contested seats including Misa Bharti who was pictched from Patliputra Seat.

The five party alliance managed to get only one seat of Kishanganj. Dr. Mohammad Jawed of Congress won Kishanganj seat with a margin of 34,466 votes.