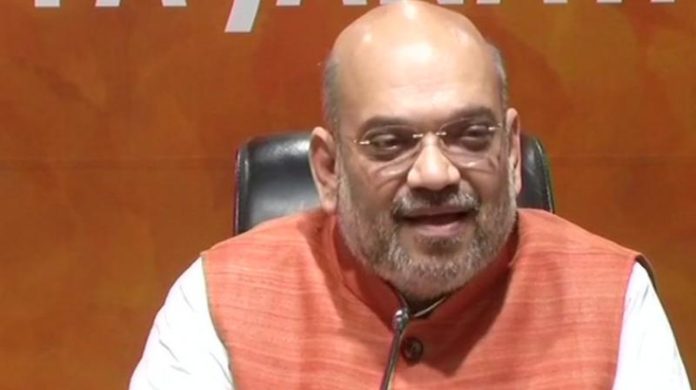 After visiting Mahbubnagar last month, BJP national President Amit Shah is all set to visit Telangana for the second time ahead of the upcoming state elections. He is reported to be visiting the state on October 10 and will address public meetings from two parliamentary constituencies.

BJP is trying to gain hold of north Telangana for which they have decided to organize a public meeting in Karimnagar tomorrow.  A senior leader of the party has said that while it is important to retain the Karimnagar MP seat, winning three Assembly seats in Karimangar is the main aim of the party,. The party also has a strong base in Vemulwada, Karimnagar, Sircilla, Peddapalli and Korutla.

BJP state general secretary, Chinta Samba Murty in a press release said, “Shah would speak to booth committee presidents and other leaders of Hyderabad, Secunderabad, Malkajgiri and Chevella Lok Sabha constituencies at the Exhibition Grounds in Hyderabad”. “Shah would also participate in a meeting of party functionaries from Mahabubnagar, Nagarkurnool, Bhongir and Nalgonda Lok Sabha seats,” the release said.

“In the afternoon, the party chief would address a public meeting for the 7 December Legislative Assembly elections at Karimnagar,” it added.

BJP chief Amit Shah would attend two separate meetings of party functionaries from parliamentary constituencies in Telangana when he visits the state on October 10.

BJP has decided to go it alone in the assembly elections.

BJP national leader P Sugunakar Rao has expressed confidence that they would be a deciding factor in forming the Telangana government after elections. The state is slated to go to polls on December 7.