The Indian Wire » Politics » Telangana Polls: From KCR to Owaisi, a look at bigwigs contesting elections 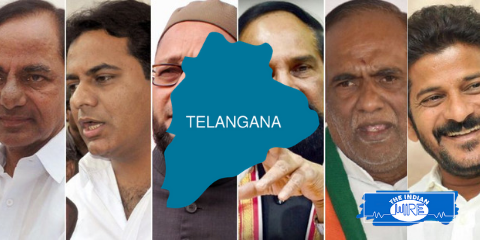 High-decibel Election Campaigning comes to a draw in Telangana on Wednesday Evening,  with the state scheduled to go to polls on Friday, December 7. Telangana Rashtriya Samithi who stormed to the power in 2014 will take on Prajakutami, grand alliance- an alliance formed by Congress with TDP and others. While the aggressive Bhartiya Janta Party is contesting electoral battle on all 119 seats alone.

According to the by Election Commission of India, over 1,800 candidates are in the electoral fray in Telangana across 119 seats in the state.

Here are the key candidates and constituencies to watch out for:

He is one of the tallest leaders of state polity. He is facing challenged by challenged by Congress candidate Vanteru Pratap Reddy from the constituency.

KT Rama Rao: The 42-year-old son of KCR and IT Minister in the state, KT Rama Rao is one of the most popular leaders in Telangana following the Chief Minister. He is seeking an re-election on Sircilla seat, which he had won with an unprecedented margin of more than 53,000 votes.

Akbaruddin Owaisi: The AIMIM firebrand leader, Akbaruddin Owaisi who boasts of being the “kingmaker” in Telangana, is contesting from the party’s strong turf Chandrayangutta. The Owaisi scion has been winning from the constituency consecutively since 1999.

Uttam Kumar Reddy: One of the last tallest Congress leaders in the state,  U K Reddy is one of the prime contenders for the chief ministerial chair, if the Mahakutami voted to power in the state. The four-time MLA is contesting from Huzurnagar — the seat which he won in 2014 by a margin of 23,924 votes.

K Laxman: The BJP State chief is contesting from Musheerabad, the constituency he won in 2014. If the BJP wins, he has promised to implement National Register of Citizens (NRC) drive in Hyderabad to weed out “terrorists”.

A Revanth Reddy: Anumula Revanth Reddy, Congress candidate from Kondangal in has traveled a very long journey since he joined the Politics in 2004.  He has emerged as a star campaigner for the Congress in Telangana, drawing huge crowds to his public meetings. Quite famous for his oratorical skills, the firebrand politician is much in demand and has got requests from at least 100 ‘Maha Kootami’ or grand alliance candidates to campaign in their constituencies.

He is Contesting the polls from Kodangal assembly constituency, where he won twice in 2009 and 2014 before joining Congress in 2017.

The results of Telangana assembly polls will be declared by the Election Commission on December 11, along with the results of assembly elections 2018 in the other four states.