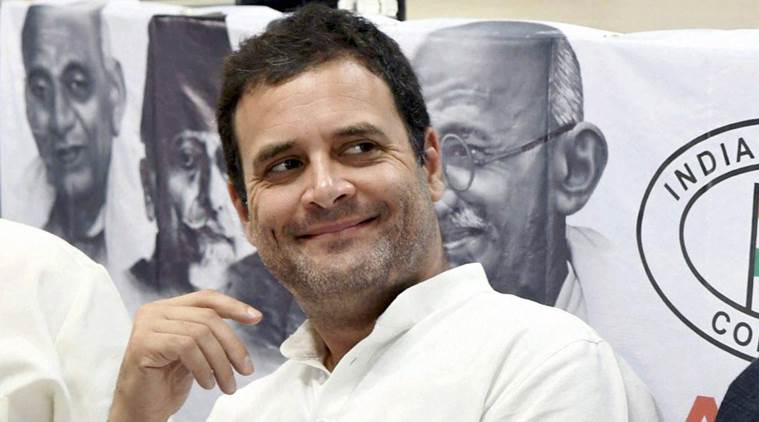 Rahul Gandhi, learning from the 2014 poll defeat visited the temples during Gujarat campaigning to clear the anti-Hindutva image of Congress.

The battle in Gujarat seems to have finally ended yesterday with the voting completed in the second phase of the elections on 14 Dec. Though the results will be announced on 18 Dec but as per the exit poll results, BJP has swept the polls both in Gujarat and Himachal Pradesh.

Congress was the ruling party in Himachal, while BJP has been reigning in Gujarat for past 22 years and seems like will continue to reign further. Ahead of the voting day, BJP was confident of nailing the victory, however, even the Congress was claiming the same. There is no doubt that Congress had given a tough fight to the BJP and the fact that BJP at times even became restless, cannot be denied. Congress can give the credit for the campaigning in Gujarat to the newly elected party President, Rahul Gandhi.

Rahul was never taken as a serious or for that matter even a dedicated leader in the political equations in India. But the view of many have definitely changed after seeing the new avatar of Rahul Gandhi during the entire campaigning of Gujarat. The Congress leader unlike before had personally taken charge with the aim to end its political exile in Gujarat.

After facing defeat in the 2014 Lok Sabha elections, numerous factors were listed down by the senior leader of Congress for its failure. After the 2014 elections, Congress formed a four-member panel led by former defense minister AK Antony to find out the reasons for the poll loss. Many Congress leader had also blamed Rahul Gandhi for the defeat, however, the Antony committee listed down several other reasons for the defeat.

One of the major reason listed by the panel was featuring the 2014 elections a battle between secularism and communalism. Some of the other reasons were the minority appeasement policy of the Congress, massive anti-incumbency against Congress chief ministers, and failure of the central and state leadership to work as a team.

After the main reasons were spotted, Congress started working on them and aimed to make its presence known once again in India. Congress changed its policies and especially the minority appeasement policy and this was the main reason that Rahul Gandhi was spotted visiting several temples throughout the Gujarat campaigning. The four-member panel had clearly stated that secularism vs communalism strategy hurt the Congress most. Therefore in order to change the anti-Hindutva image of the Congress, Rahul made it a point to visit temples and clean the image.

The Panel also pointed out that the minority-appeasement policy and its push for quota for Muslims alienated the majority Hindu community. This probably was the reason that throughout the entire campaign the Congress tactfully avoided directly addressing the Muslim community or even bring up the 2002 Godhra incident.

Though the sudden visits of Rahul Gandhi to the temples was criticized strongly by the BJP, it did not hamper the determination of Rahul. In fact, during a press conference he also pointed out that it was not just in Gujarat that he was visiting the temples, but he also offered prayers at the Kedarnath Temple which was in Uttrakhand.

During the campaigning, BJP also tried hard to pull down on the Congress leader for visiting the temples only to show-off that Congress also believe in Hindutva. An incident was much highlighted by the Congress when the name of Rahul Gandhi and the Congress Rajya Sabha member in Gujarat, Ahmed Patel’s names flashed in the non-Hindu register in the Somnath Temple. The ruling party had even raised a question on the religion of Rahul Gandhi, saying that he was not a Hindu. The party also said that India is a secular country and Rahul has the freedom to believe and practice any religion, but he should not try to put a false picture in front of the people making them believe that Congress is not an anti-Hindutva party.

Responding to the questions raised by the BJP, Rahul responded that he and his family was a ‘shiv-bhakt’ and he was a ‘janeu dhari Hindu’ but unlike the other, he did not like to flaunt as to what religion he believes in and follows.

As per the exit polls, BJP is all set for the sixth term on Gujarat, and if this happens, surely many questions will be raised on the ability of Rahul Gandhi as a leader. If the Congress is defeated in Gujarat, this will definitely force, a process of introspection in the Congress, but there is no doubt that Rahul will be blamed for the failure.

Even the critics of Congress are of the view that Rahul is a new kind of leader now. The qualities that Rahul displayed during the entire campaigning of 3-4 months in Gujarat has made the people believe that he is Confident, articulate, youthful, sober, genuine-sounding, hard-working, able to establish an emotional connect with the masses, and a leader who combines humility and simplicity.

According to the opinions of the political experts, “Modi may win Gujarat, but Rahul has won the admiration of many by coming across as a leader who cares more for democratic and constitutional values than the prime minister.” Even though the Congress will be loosing as predicted by the surveys and the exit poll results, Congress can use this defeat as a stepping stone for future success. As per the experts, Rahul should not aim for quick wins and easy success, rather after failing in Gujarat, keeping in mind the long-term goals, the Congress President should concentrate on revamping the party organisation.

Most importantly, if the Congress hopes to make a come back in the Indian politics, it should for the very first step that the party should take is revitalising the party especially at the booth level. One of the major reason for the victory of BJP is its strong base at the grassroot level and no doubt the parent party od the BJP, RSS plays a major role in this. BJP has a strong network of workers at the booth level that can connect with the people, which the Congress lacks.

Another thing that might help the party to build a strong base is focusing on its policies. As per the views of the experts, throughout the campaigning, the only thing that Rahul did was point out the failures of BJP and criticise the Prime Minister. However, the party should now start focusing on addressing the myriad problems confronting the nation and finding solutions to them.

If the party even now, start focusing on the loopholes in the party and works in mending them Congress still has a chance or else the dream of a Congress mukt Bharat of BJP is not far from achievable.