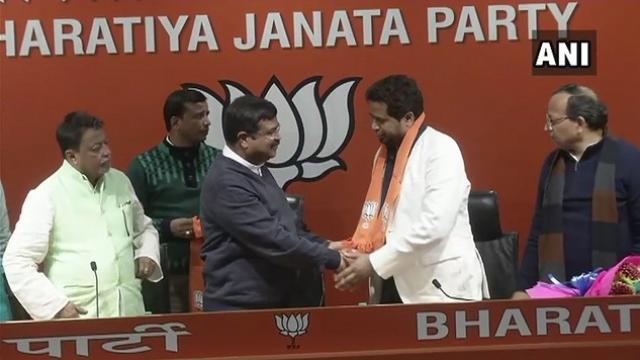 In a major setback to Mamata Banerjee led Trinamool Congress on Wednesday, its Member of Parliament from Bishnupur, Saumitra Khan joined the Bhartiya Janta Party. The swap is seen as a big blow the Mamata led party as the Lok Sabha 2019 is around the corner. He is the first TMC MP to join the Saffron Party.

Saumitra Khan who was has been in an internal rift with the party had been terminated by the TMC for ‘anti-party’ activities along with other Lok Sabha MP Anupam Hazra claims party after the development.

Comparing Mamata Banerjee’s rule to Hitler Rule, he hit out at TMC and said, “TMC is now run by Mamata di’s nephew Abhishek Banerjee. Khan alleged that Abhishek had threatened to get him arrested and said “there is a threat to my life because I raised my voice against the party’s misconduct”.

The former TMC MP also hinted that many more from the Mamata Banerjee-led party will resign. “Many more from TMC will follow suit,” Saumitra Khan said.

At the occasion once-a close aide to Mamata Banerjee, Mukul Roy takes a jibe at Mamata Banerjee and said, “Saumitra Khan is joining the BJP because the TMC has no longer remained a political party. It is now a private company run by ‘Pishi’ (referring to Mamata Banerjee) and ‘Bhaipo’ (her nephew),” he told a popular English website.

Sources in the TMC revealed that Mamata Banerjee was unhappy with his performance as the member of parliament. Khan was repeatedly told in core meetings to improve his performance party sources further revealed.

The development came a few days after several minority leaders from the TMC, CPI(M) and Muslim League joined the Congress party.