The Indian Wire » Politics » TMC will support any party that is against BJP: Mamata Banerjee 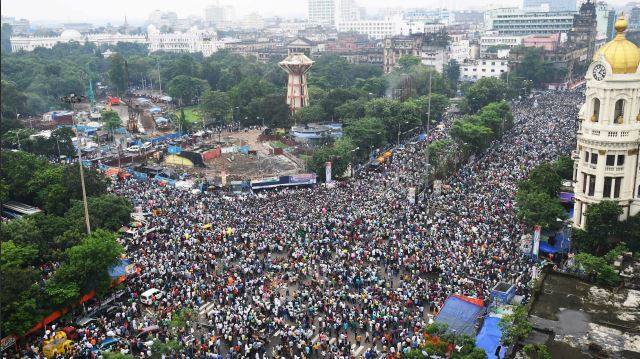 Every year on July 21 since 1993 Trinamool Congress holds the Martyrs’ Day rally in memory of 13 youths who were killed in police firing on this day. On Friday, while addressing the rally West Bengal Chief Minister Mamata Banerjee announced to launch a ‘BJP Quit India‘ movement from Aug 9 which will last for three weeks till Aug 30.

Banerjee has openly declared an anti-BJP drive to move the party out of India saying that TMC will support any party that is against BJP. She said that “Bengal is with Soniaji. We are with Nitishji, we are with Arvind, Laluji, Navinji… We will support anyone who opposes he BJP. There will be a grand alliance formed before the Lok Sabha polls. Big brother (BJP) will be ousted from power in the next Lok Sabha polls.”

During the rally, she also said that the Lok Sabha elections may be rescheduled and held next year instead of 2019. Regarding the polls, she challenged that “Those who are thinking 2019 (Lok Sabha) is in their pocket, are wrong. There is a big hole in that pocket. (PM Narendra) Modi will get only 30 per cent of the votes. We take it as a challenge to drive the BJP out. The BJP will not get a single seat from West Bengal.” She said that 18 opposition parties came together for the Presidential polls and 2 more joined for the Vice-Presidential polls, this unity of the opposition will be taken forward and a grand alliance will be formed against BJP.

Banerjee also accused BJP of failing on all fronts and said that India’s relations with foreign countries have deteriorated under the BJP-led government at the Centre. She questioned that why India is not improving its relations with Nepal, Bhutan and Bangladesh, which have borders with West Bengal?

She further spoke about the recent lynching issues saying that “they were ‘gau rakshashas’ in the name of ‘gau rakshaks’.” She added that India was going through a more than emergency situation and alleged that under the rule of BJP, not only the rights of minorities are being encroached upon but because of the duplicate Hindus, actual Hindus were also suffering.

Mamata Banerjee urged all the opposition parties to come and join the movement against BJP.

The party did not expel Shankersinh Vaghela: Congress
Punjab education in turmoil, even toppers fail miserably in CET