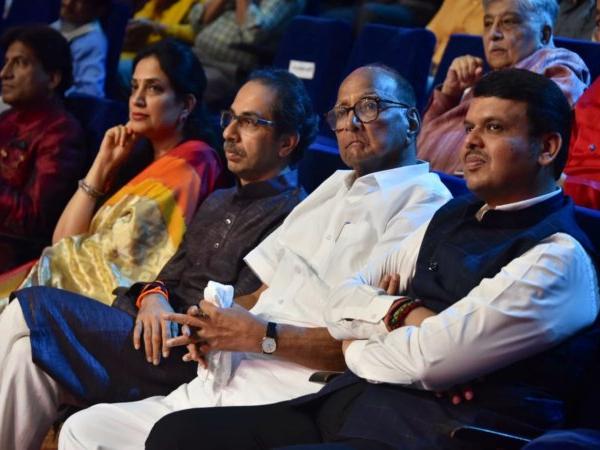 Shiv Sena chief Uddhav Thackeray and State Chief Minister Devendra Fadnavis were seen sitting next to each other during a promotional event for the movie ‘Thackeray’ on Tuesday led to speculations about ‘All is well’ between both the parties and hinted towards a possibility of an alliance. Nationalist Congress Party chief Sharad Pawar was also present at the event. Shiv Sena leader Sanjay Raut, who is also the producer of the event, is believed to be close to Pawar.

Both BJP and its Maharashtra ally, Shiv Sena have been in words of war for a month now over possibilities of an alliance for the upcoming Lok Sabha 2019 Polls.

Bharatiya Janata Party state president Raosaheb Danve on Monday said that the BJP-Shiv Sena alliance will happen based on a formula agreed upon by both the parties.

With the opposition on its path to form a Pan India Alliance against the Bhartiya Janta Party, it’s imperative that the BJP will look to forge partnerships with regional parties.

While speaking at a promotional event of the upcoming movie Thackeray, based on late Shiv Sena founder Bal Thackeray, Devendra Fadnavis said that the responsibility of the coalition is on their shoulders. He said his party will find a way to keep the coalition alive with Shiv Sena, reported India Today.

BJP President Amit Shah early this month set a deadline of January 31 for Shiv Sena to take a call on the future of Shiv Sena’s alliance with them. Amit Shah during a meeting with Maharashtra MPs on Wednesday indicated a possibility of the saffron party might go alone it things with Shiv Sena could not be materialized. Amit Shah while addressing a meeting in Mumbai reportedly give this message to Party’s Maharashtra Parliamentarians.

However, there were reports about Sena call the party meeting to take a call on Alliance. Uddhav Thackeray in action after BJP’s deadline, calls a party meeting to deliberate upon the alliance