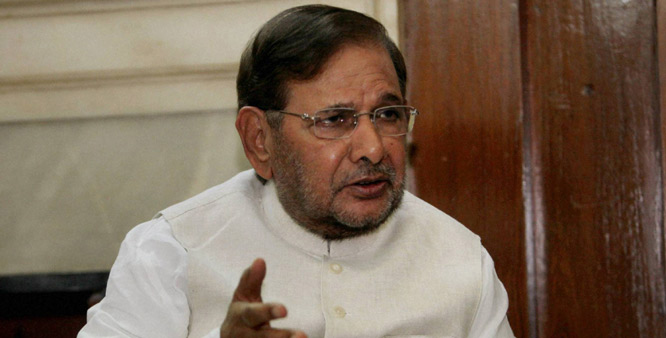 Sharad Yadav the seven-time member of Lok Sabha and twice the member of Rajya Sabha also the oldest pillar of Janta Dal Party is feeling betrayed and left out.

He was one of the members to establish the party and help Nitish Kumar become the Chief Minister of Bihar but now is feeling ignored as he was not informed earlier of Kumar’s decision. Sharad Yadav said that he was not aware that Nitish would so soon break the grand alliance and join BJP.

Though this is not the first time Nitish is changing the grounds, earlier he was with BJP and had backed off from the party when Narendra Modi was announced as the Prime ministerial candidate as they did not share very good relations then. Kumar broke the alliance with RJD and Congress on Wednesday and swore in as the CM again on Thursday with his JD(U)-BJP government. He also won the trust vote in Bihar Assembly on Friday.

The anti-JD(U) parties were expecting a resignation of Sharad Yadav from the party but it turned out to be the other way round. Few JD(U) sources on Friday revealed that though Sharad is unhappy with the decision of Kumar he will not quit the party yet. Following the victory of trust vote by  Nitish Kumar, Congress leader Ghulam Nabi Azad and CPI-M General Secretary Sitaram Yechury on Friday met senior JD-U leader Sharad Yadav to hold discussions about Kumar’s decision.

This was on Friday, but the speed at which Bihar political scenarios are changing sources said that there is a possibility of Sharad Yadav making a public statement in the next few days.

It seems like Bihar has a lot left to witness it is just the trailer, the movie may bring in some unexpected changes in the state.